“THE perception I had, anyway, was that we were on top of the world,” Sarah Palin said at the climax of last Sunday’s premiere of her new television series, “Sarah Palin’s Alaska.” At that point our fearless heroine had just completed a perilous rock climb, and if she looked as if she’d just stepped out of a spa instead, don’t expect her fans to question the reality. For them, Palin’s perception is the only reality that counts. 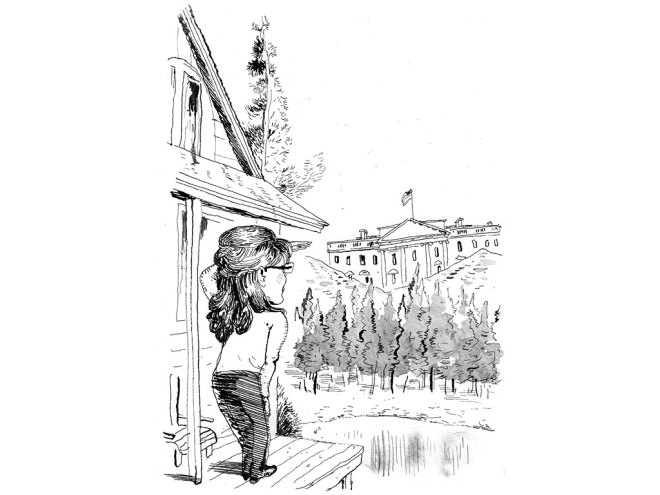 Palin is on the top of her worlds — both the Republican Party and the media universe. “Sarah Palin’s Alaska” set a ratings record for a premiere on TLC, attracting nearly five million viewers — twice the audience of last month’s season finale of the blue-state cable favorite, “Mad Men.” The next night Palin and her husband Todd were enshrined as proud parents in touchy-feely interviews on “Dancing With the Stars,” the network sensation (21 million viewers) where their daughter Bristol has miraculously escaped elimination all season despite being neither a star nor a dancer. This week Sarah Palin will most likely vanquish George W. Bush and Keith Richards on the best-seller list with her new book.

If logic applied to Palin’s career trajectory, this month might have been judged dreadful for her. In an otherwise great year for Republicans she endorsed a “Star Wars” bar gaggle of anomalous and wacky losers — the former witch, Christine O’Donnell; the raging nativist, Tom Tancredo; and at least two candidates who called for armed insurrection against the government, Sharron Angle and a would-be Texas congressman, Stephen Broden, who lost by over 50 percentage points. Last week voters in Palin’s home state humiliatingly “refudiated” her protégé, Joe Miller, overturning his victory in the G.O.P. Senate primary with a write-in campaign.

But logic doesn’t apply to Palin. What might bring down other politicians only seems to make her stronger: the malapropisms and gaffes, the cut-and-run half-term governorship, family scandals, shameless lying and rapacious self-merchandising. In an angry time when America’s experts and elites all seem to have failed, her amateurism and liabilities are badges of honor. She has turned fallibility into a formula for success.

Republican leaders who want to stop her, and they are legion, are utterly baffled about how to do so. Democrats, who gloat that she’s the Republicans’ problem, may be humoring themselves. When Palin told Barbara Walters last week that she believed she could beat Barack Obama in 2012, it wasn’t an idle boast. Should Michael Bloomberg decide to spend billions on a quixotic run as a third-party spoiler, all bets on Obama are off.

Of course Palin hasn’t decided to run yet. Why rush? In the post-midterms Gallup poll she hit her all-time high unfavorable rating (52 percent), but in the G.O.P. her favorable rating is an awesome 80 percent, virtually unchanged from her standing at the end of 2008 (83 percent). She can keep floating above the pack indefinitely as the celebrity star of a full-time reality show where she gets to call all the shots. The Perils of Palin maintains its soap-operatic drive not just because of the tabloid antics of Bristol, Levi, et al., but because you are kept guessing about where the pop culture ends and the politics begins.

The producer of “Sarah Palin’s Alaska,” Mark Burnett (whose past hits appropriately include both “Survivor” and “The Apprentice”), has declared that the series is “completely nonpolitical.” It is in fact completely political — an eight-week infomercial that, miraculously enough, is paying the personality it promotes (a reported $250,000 a week) rather than charging her. The show’s sole political mission is to maintain the fervor and loyalty of the G.O.P. base, not to win over Palin’s detractors. In the debut episode, the breathtaking Alaskan landscapes were cannily intermixed with vignettes showcasing the star’s ostensibly model kids and husband, her charming dad, the villainous lamestream media (represented by Palin’s unwanted neighbor, the journalist Joe McGinniss), and the heroic Rupert Murdoch media (represented by an off-screen Bill O’Reilly).

Palin fires a couple of Annie Oakley-style shots before we’re even out of the opening credits. The whole package is a calculated paean to her down-home, self-reliant frontiersiness — an extravagant high-def remake of Bush’s photo ops clearing brush at his “ranch” in Crawford, which in turn were an homage to Ronald Reagan’s old horseback photo ops in his lush cowpoke digs in Santa Barbara. With a showbiz-fueled net worth widely estimated in the double-digit millions, Palin is as Hollywood in her way as Reagan was, but you won’t see any bling or factotums in “Sarah Palin’s Alaska.” She tells the audience that she doesn’t have “much of a staff” to tend to her sprawling family and career. “We do most everything ourselves,” she says, and not with a wink.

Thanks to the in-kind contribution of this “nonpolitical” series, Palin needn’t join standard-issue rivals like Mitt Romney, Newt Gingrich, Haley Barbour and Tim Pawlenty in groveling before donors and primary-state operatives to dutifully check all the boxes of a traditional Republican campaign. Palin not only has TLC in her camp but, better still, Murdoch. Other potential 2012 candidates are also on the Fox News payroll, but Palin is the only one, as Alessandra Stanley wrote in The Times, whose every appearance is “announced with the kind of advance teasing and clip montages that talk shows use to introduce major movie stars.” Pity poor Mike Huckabee, relegated to a graveyard time slot, with the ratings to match.

The Fox spotlight is only part of Murdoch’s largess. As her publisher, he will foot the bill for the coming “book tour” whose itinerary disproportionately dotes on the primary states of Iowa and South Carolina. The editorial page of Murdoch’s Wall Street Journal is also on board, recently praising Palin for her transparently ghost-written critique of the Federal Reserve’s use of quantitative easing. “Mrs. Palin is way ahead of her potential presidential competitors on this policy point,” The Journal wrote, and “shows a talent for putting a technical subject in language that average Americans can understand.”

With Murdoch, Rush Limbaugh, Glenn Beck and Sean Hannity on her side, Palin hardly needs the grandees of the so-called Republican establishment. They know it and flail at her constantly. Politico reported just before Election Day that unnamed “party elders” were nearly united in wanting to stop her, out of fear that she’d win the nomination and then be crushed by Obama. Their complaints are seconded daily by Bush White House alumni like Karl Rove, Michael Gerson, and Mark McKinnon, who said recently that Palin’s “stock is falling and pretty rapidly now” and that “if she’s smart, she does not run.”

This is either denial or wishful thinking. The same criticisms that the Bushies fling at Palin were those once aimed at Bush: a slender résumé, a lack of intellectual curiosity and foreign travel, a lazy inclination to favor from-the-gut improvisation over cracking the briefing books. These spitballs are no more likely to derail Palin within the G.O.P. than they did him.

As Palin has refused to heed these patrician Republicans, some of them have gotten so testy they sound like Democrats. Peggy Noonan called her a “nincompoop” last month, and Susan Collins, the senator from Maine, dismissed her as a “celebrity commentator.” Rove tut-tutted Palin’s TLC show for undermining her aspirations to “gravitas.” These insults just play into Palin’s hands, burnishing her image as an exemplar of the “real America” battling the snooty powers-that-be. To serve as an Andrew Jackson or perhaps George Wallace for the 21st century, the last thing she wants or needs is gravitas.

It’s anti-elitism that most defines angry populism in this moment, and, as David Frum, another Bush alumnus (and Palin critic), has pointed out, populist rage on the right is aimed at the educated, not the wealthy. The Bushies and Noonans and dwindling retro-moderate Republicans are no less loathed by Palinistas and their Tea Party fellow travelers than is Obama’s Ivy League White House. When Palin mocks her G.O.P. establishment critics as tortured, paranoid, sleazy and a “good-old-boys club,” she pays no penalty for doing so. The more condescending the attacks on her, the more she thrives. This same dynamic is also working for her daughter Bristol, who week after week has received low scores and patronizing dismissals from the professional judges on “Dancing with the Stars” only to be rescued by populist masses voting at home.

Revealingly, Sarah Palin’s potential rivals for the 2012 nomination have not joined the party establishment in publicly criticizing her. They are afraid of crossing Palin and the 80 percent of the party that admires her. So how do they stop her? Not by feeding their contempt in blind quotes to the press — as a Romney aide did by telling Time’s Mark Halperin she isn’t “a serious human being.” Not by hoping against hope that Murdoch might turn off the media oxygen that feeds both Palin’s viability and News Corporation’s bottom line. Sooner or later Palin’s opponents will instead have to man up — as Palin might say — and actually summon the courage to take her on mano-a-maverick in broad daylight.

Short of that, there’s little reason to believe now that she cannot dance to the top of the Republican ticket when and if she wants to.