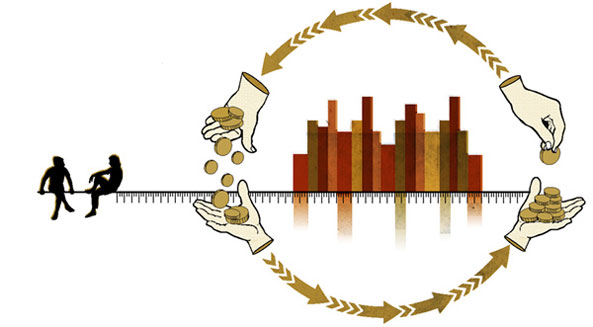 When I was 17 years old, I had the honor of being the youngest person in the history of New York Hospital to undergo surgery for a herniated disc. This was at a time in which operations like this kept people in the hospital for over a week. The day after my surgery, I awoke to find a friend of mine sitting in a chair across from my bed. I don’t remember much about his visit. I am sure I was too sedated to say much. But I will not forget that he visited me on that day, and sat there for I know not how long, while my humanity was in the care of a morphine drip.

The official discourses of our relations with one another do not have much to say about the afternoon my friend spent with me. Our age, what we might call the age of economics, is in thrall to two types of relationships which reflect the lives we are encouraged to lead. There are consumer relationships, those that we participate in for the pleasure they bring us. And there are entrepreneurial relationships, those that we invest in hoping they will bring us some return. In a time in which the discourse of economics seeks to hold us in its grip, this should come as no surprise.

The encouragement toward relationships of consumption is nowhere more prominently on display than in reality television. Jon and Kate, the cast of “Real World,” the Kardashians, and their kin across the spectrum conduct their lives for our entertainment. It is available to us in turn to respond in a minor key by displaying our own relationships on YouTube. Or, barring that, we can collect friends like shoes or baseball cards on Facebook.

Entrepreneurial relationships have, in some sense, always been with us. Using people for one’s ends is not a novel practice. It has gained momentum, however, as the reduction of governmental support has diminished social solidarity and the rise of finance capitalism has stressed investment over production. The economic fruits of the latter have lately been with us, but the interpersonal ones, while more persistent, remain veiled. Where nothing is produced except personal gain, relationships come loose from their social moorings.

Aristotle thought that there were three types of friendship: those of pleasure, those of usefulness, and true friendship. In friendships of pleasure, “it is not for their character that men love ready-witted people, but because they find them pleasant.” In the latter, “those who love each other for their utility do not love each other for themselves but in virtue of some good which they get from each other.” For him, the first is characteristic of the young, who are focused on momentary enjoyment, while the second is often the province of the old, who need assistance to cope with their frailty. What the rise of recent public rhetoric and practice has accomplished is to cast the first two in economic terms while forgetting about the third.

In our lives, however, few of us have entirely forgotten about the third — true friendship. We may not define it as Aristotle did — friendship among the already virtuous — but we live it in our own way nonetheless. Our close friendships stand as a challenge to the tenor of our times.

Conversely, our times challenge those friendships. This is why we must reflect on friendship; so that it doesn’t slip away from us under the pressure of a dominant economic discourse. We are all, and always, creatures of our time. In the case of friendship, we must push back against that time if we are to sustain what, for many of us, are among the most important elements of our lives. It is those elements that allow us to sit by the bedside of a friend: not because we know it is worth it, but because the question of worth does not even arise.

There is much that might be said about friendships. They allow us to see ourselves from the perspective of another. They open up new interests or deepen current ones. They offer us support during difficult periods in our lives. The aspect of friendship that I would like to focus on is its non-economic character. Although we benefit from our close friendships, these friendships are not a matter of calculable gain and loss. While we draw pleasure from them, they are not a matter solely of consuming pleasure. And while the time we spend with our friends and the favors we do for them are often reciprocated in an informal way, we do not spend that time or offer those favors in view of the reciprocation that might ensue.

Friendships follow a rhythm that is distinct from that of either consumer or entrepreneurial relationships. This is at once their deepest and most fragile characteristic. Consumer pleasures are transient. They engulf us for a short period and then they fade, like a drug. That is why they often need to be renewed periodically. Entrepreneurship, when successful, leads to the victory of personal gain. We cultivate a colleague in the field or a contact outside of it in the hope that it will advance our career or enhance our status. When it does, we feel a sense of personal success. In both cases, there is the enjoyment of what comes to us through the medium of other human beings.

Friendships worthy of the name are different. Their rhythm lies not in what they bring to us, but rather in what we immerse ourselves in. To be a friend is to step into the stream of another’s life. It is, while not neglecting my own life, to take pleasure in another’s pleasure, and to share their pain as partly my own. The borders of my life, while not entirely erased, become less clear than they might be. Rather than the rhythm of pleasure followed by emptiness, or that of investment and then profit, friendships follow a rhythm that is at once subtler and more persistent. This rhythm is subtler because it often (although not always) lacks the mark of a consumed pleasure or a successful investment. But even so, it remains there, part of the ground of our lives that lies both within us and without.

To be this ground, friendships have a relation to time that is foreign to an economic orientation. Consumer relationships are focused on the momentary present. It is what brings immediate pleasure that matters. Entrepreneurial relationships have more to do with the future. How I act toward others is determined by what they might do for me down the road. Friendships, although lived in the present and assumed to continue into the future, also have a deeper tie to the past than either of these. Past time is sedimented in a friendship. It accretes over the hours and days friends spend together, forming the foundation upon which the character of a relationship is built. This sedimentation need not be a happy one. Shared experience, not just common amusement or advancement, is the ground of friendship.

Of course, to have friendships like this, one must be prepared to take up the past as a ground for friendship. This ground does not come to us, ready-made. We must make it our own. And this, perhaps, is the contemporary lesson we can draw from Aristotle’s view that true friendship requires virtuous partners, that “perfect friendship is the friendship of men who are good.” If we are to have friends, then we must be willing to approach some among our relationships as offering an invitation to build something outside the scope of our own desires. We must be willing to forgo pleasure or usefulness for something that emerges not within but between one of us and another.

It is precisely this non-economic character that is threatened in a society in which each of us is thrown upon his or her resources and offered only the bywords of ownership, shopping, competition, and growth. It is threatened when we are encouraged to look upon those around us as the stuff of our current enjoyment or our future advantage. It is threatened when we are led to believe that friendships without a recognizable gain are, in the economic sense, irrational. Friendships are not without why, perhaps, but they are certainly without that particular why.

In turn, however, it is friendship that allows us to see that there is more than what the prevalent neoliberal discourse places before us as our possibilities. In a world often ruled by the dollar and what it can buy, friendship, like love, opens other vistas. The critic John Berger once said of one of his friendships, “We were not somewhere between success and failure; we were elsewhere.” To be able to sit by the bed of another, watching him sleep, waiting for nothing else, is to understand where else we might be.

Todd May is a professor of philosophy at Clemson University. He is the author 10 books, including “The Philosophy of Foucault” and “Death,” and is at work on a book about friendship in the contemporary period.