Buried in a Bombed-Out Cellar

The works were thought to have been lost forever. Eleven sculptures, all of them shunned by the Nazis for being un-German, have been found during subway construction work in the heart of Berlin. But how did they get there?

Digging new subway lines in Europe is no easy task. It’s not the excavating itself that is so problematic; modern machinery can bore through the earth with surprising speed these days. Rather, in places that have been inhabited for centuries, if not millennia, no one really knows what one will find. The delays for archeological research can be significant.

In Berlin, that hasn’t often been a problem. Aside from significant numbers of unexploded bombs dropped on the city during World War II and a few long-forgotten building foundations, construction tends to be relatively straightforward. The city, after all, spent the vast majority of its 770 year history as a regional backwater.

This autumn, however, an extension to Berlin’s U-5 subway line means the city can gloat over a world-class delay of its own. Workers in the initial phases of building a subway stop in front of the Berlin city hall stumbled across remains of the city’s original city hall, built in 1290. Archeologists were ecstatic. 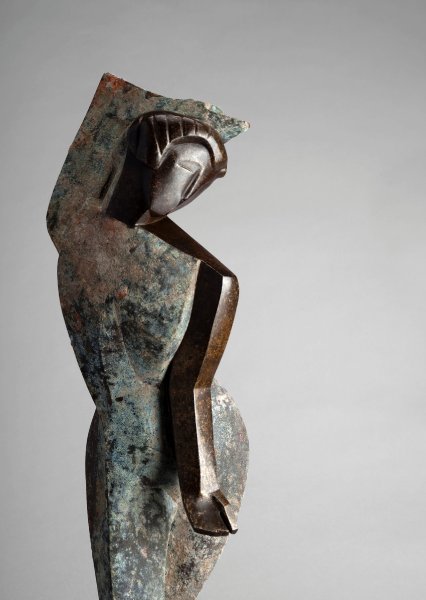 The works were thought to have been lost forever. During construction work on a new subway line through the heart of Berlin, archeologists discovered 11 sculptures that were once part of the Nazis’ Degenerate Art exhibition, pieces that the regime found too “un-German.” This piece, “The Dancer” by Marg Moll from 1930, was among them. The face and arm have been polished to show its original condition.

The pieces are thought to have been in an apartment in a building on Königstrasse (King Street) when it was bombed in the late summer of 1944. All the works show fire damage. This piece is called “A Likeness of the Actress Anni Mewes” by Edwin Scharff.

Just how the pieces got to the Königstrasse building remain unclear. Historians think they may have been purchased by a tenant in the building named Erhard Oewerdieck, a government official who was honored after World War II for helping Jews escape the Holocaust. The taller piece in the foreground has not yet been identified. Behind it stands a piece by Gustaf Heinrich Wolff. The smaller sculpture on the right is “Female Bust,” by Naum Slutzky.

Degenerate Art was the term the Nazis applied to most early 20th century art that was considered to be too “Jewish” or “un-German.” Many of the works thus branded were included in a travelling exhibition in 1937. The pieces were displayed in cramped, poorly lit rooms and were surrounded by insulting graffiti.

“Pregnant Woman” (1918) by Emy Roeders. While the pieces have been largely cleaned up, most have been left unpolished to indicate the damage done by the fire that destroyed the building on Königstrasse where they were found. “One can see the fate they have lived through and the dignity which they still have,” said archeologist Wemhoff on Monday.

All of the newly discovered sculptures can be seen in the New Museum as of Tuesday. Here, a piece which has not yet been identified. 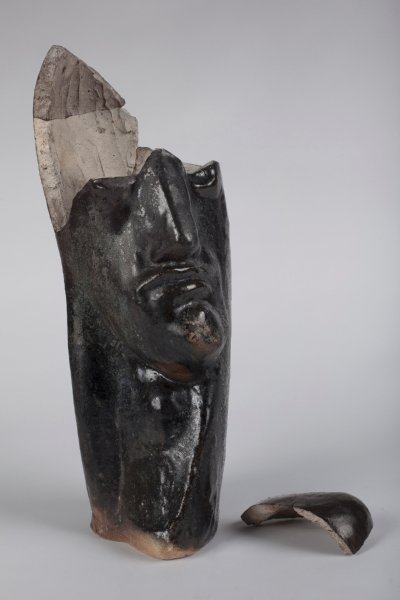 “Head,” made in 1925 by Otto Freundlich. The lower part of the face was intact when it was found, but some fragments have since been replaced.

“Standing Girl” by Otto Braun. Many of the works of art on the Nazis’ list of degenerate art have never been found.

On Monday, however, Berlin’s Mayor Klaus Wowereit announced a new series of finds that has generated even greater enthusiasm. In digs carried out throughout this year, archeologists have unearthed 11 sculptures thought to have been lost forever — valuable works of art that disappeared during World War II after having been included on the Nazis’ list of degenerate art. Most of them have now been identified and have been put on display in Berlin’s Neues Museum.

“We hadn’t expected this confrontation with this period of time, with these samples of degenerate art — it is a minor miracle,” Wowereit said at a press conference on Monday. “It is unique.”

The finds were made among the ruins of Königstrasse (King Street), a formerly bustling street in the heart of prewar Berlin. Allied bombs decimated the quarter, however, and much of the rubble was simply buried after the war to make room for reconstruction. Much of the archeological work currently under way consists of sifting through the rubble that remains in the intact cellars of the structures that once lined the street.

In early January, workers discovered a small bronze bust in the shovel of a front loader that was cleaning out one of those cellars.

“We thought it was a one-off,” said Matthias Wemhoff, director of the Museum of Prehistory and Early History in Berlin and a member of the archeology team looking into the finds. “It wasn’t immediately clear that it was linked to degenerate art.”

Soon, however, more artworks were discovered — all sculptures, all from early 20th century artists and all bearing clear indications of having been fire-damaged. Only at the end of September did it become clear that all of the art pieces — by such artists as Otto Freundlich, Naom Slutzky and Marg Moll, among others — were on the list of artworks branded as undesirable by the Nazis. All were thought to have been lost forever.

The list of works shunned by the Nazis for being “Jewish” or “un-German” is long, and encompasses primarily early 20th century modern art including pieces by such luminaries as Emil Nolde, Max Ernst, Paul Klee, Pablo Picasso and many others. Some 20,000 such works were confiscated by the party and those that weren’t sold for hard currency or stolen by cynical party officials were simply destroyed. In 1937, a travelling exhibition of such “degenerate art,” as it was called, made its way through Germany.

Many of the works now discovered in Berlin were part of that travelling show. Historians working on identifying the provenance of the pieces now unearthed have found documents indicating that some of them were returned to the Nazi Propaganda Ministry in 1941. After that, though, the paper trail goes cold.

Wemhoff believes that the works may have been purchased by a resident of Königstrasse 50, beneath which the finds were made, to save them from destruction. Initial speculation has centered around Erhard Oewerdieck, a government official who was awarded the title “Righteous among the Nations” by the Yad Vashem Holocaust memorial in Israel for helping Jews escape the Holocaust during World War II. He rented several office rooms on the fourth floor of the building in 1941. He is also considered to the be only one in the building by then — all of the Jewish tenants had been evicted and many deported by then — to have had the wherewithal to collect the works.

Archeologists said on Monday that any pieces of art he might have kept in his offices would have ended up in a pile of rubble following the bombing run which destroyed the building in the late summer of 1944. City officials have initiated contact with Oewerdieck’s family in an effort to learn if he did in fact seek to protect some degenerate artworks from destruction.

They are also interested in learning what other works he might have held. Archeologists have found some bits of wood and other indications that more destructible pieces might also have been present. “It is possible that there were wood sculptures or even oil paintings,” said Wemhoff.

But if there were, they would have been completely incinerated.