‘I have created this book as a literary amuse-bouche,” food historian William Woys Weaver says in “Culinary Ephemera,” but his collection of period American recipes, labels, ads, menus, matchbooks and much else is more likely to sate an appetite than whet it. The 352 color plates, accompanied by informed, diverting text, cover everything from food-oriented “almanacs and calendars” to “wrappers and packaging.” The book tells us much about who we’ve been as well as what we’ve eaten . . . and drunk. There is no better evocation of a native oenophilia’s first stirrings, for instance, than the Engels & Krudwig Wine Co.’s 1940s label proclaiming “American Grape Wine”—made in sultry Sandusky, Ohio—to be “bottled romance. 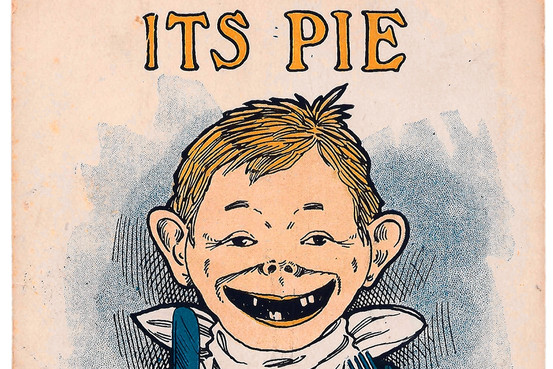 Many of the pieces here come from the 19th century, like the menu for a “corn festival” hosted in 1886 by the Ladies’ Aid Society of Wilkes-Barre, Pa., offering corn mush, corn bread, corn-starch blanc mange and—I kid you not—corn coffee. Remarkably, the menu is printed on a corn husk. How the menu-husk survived all these years, as Mr. Weaver says, is “a comment on the serendipitous nature of ephemera collecting.”

Serendipity brings us such 19th-century items as an 1887 advertising circular for the pork products of the Strawberry Hill farm in Florence, Mass. (a drawing of a pig emblazoned “No cholera here!”); an 1870s business card for the J.F. Hoffman & Co. Pie Bakers in Pittsburgh (their pies were “O.K.”); and a candy wrapper for Black Jacks molasses treats made in the 1890s in Salem, Mass.

The charm of the 20th-century pieces lies mostly in those from before 1950 or so, as with the menu for a Graf Zeppelin flight from Rio de Janeiro to New York in May 1930. (The Duck Supreme With Olives sounds tempting.) Then there is the 1940 Christmas menu for the U.S.S. Helena, moored in Pearl Harbor. Many of the crew members who dined on that meal would die a year later in the Japanese surprise attack. The ephemeral, it turns out, has the power to stir more than historical curiosity.

Mr. Bakshian writes about gastronomy for the Journal.