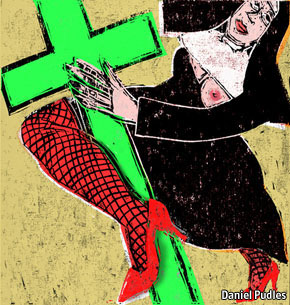 CRAIG MONSON says his book, five tales about unruly nuns, might while away a plane flight. He is too modest. “Nuns Behaving Badly” wears its learning with a smile, but it throws a sharp light into dark Roman Catholic corners.

Convents in 16th- and 17th-century Italy were largely dumping-grounds for spare women: widows, discarded mistresses, converted prostitutes and, above all, the unmarried daughters of the nobility. Aristocratic families were loth to stump up dowries for more than one daughter. The rest were walled away. In Milan in the 1600s, three-quarters of the female nobility were cloistered. At the same time the church was cracking down on lax discipline, in nunneries as much as anywhere.

The result was a headache for the (male) authorities. With few genuinely spiritual nuns, convents were full of women finding ways round the rules through scheming and backbiting, through art or music or lesbian love and once, even, through torching their convent and escaping en masse. All this meant extra paperwork: complaints to the Vatican, petitions, investigations, and interrogations.

Verbatim transcripts offer a brawling, reality-television world: “Sister Domitella, with her hands on her hips, said to her, ‘If I don’t get some respect, for the love of God, I’d like to strangle you… because you blab to the Curia about everything that goes on here in the convent’.” Or again: “Sister Vinciguerra found my gift [of embroidery to the convent chapel] intolerable…she ripped it off, tore it apart and finally burned it.” Mr Monson unravels these mysteries, tracing their origins and following their repercussions beyond the convent walls.

The saddest stories are about the suppression of music. Nuns sang unseen beyond the altar and people flocked to hear their hidden choirs. But the church pronounced female music the devil’s work, allowing only the plainest chant. Two nuns stand out: Laura Bovia, who transported audiences “so high that, here on Earth, they seem to taste heavenly harmony”; and Christina Cavazza, a singer who crept out in disguise to attend the opera. Both were silenced.