What managers can learn from Somali pirates 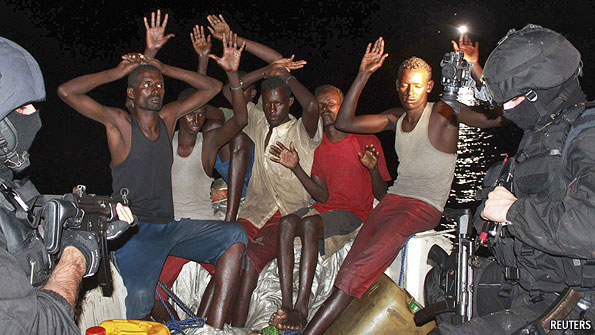 PURVEYORS of management-speak are fond of quoting cod insights from military strategists. According to David James, a professor at Henley Business School, they would do better studying the management styles of some of those the armed forces are fighting, such as Somali pirates. Alongside Paul Kearney, a lieutenant-colonel in the Royal Marines, Professor James has been studying the operations of the pirates, as well as insurgents in Afghanistan and Iraq, to see if they have anything to teach legitimate firms.

The threat to life and liberty aside, Somali pirates’ business model is impressive. According to the professor, each raid costs the pirates around $30,000. On average one raid in three is successful. The reward for a triumphant venture, however, can be in the millions.

The organisation behind the pirates would be familiar to many ordinary businesses. For a start, they have a similar backend—including the kind of streamlined logistics and operations controls that would be the envy of most companies. Their success has even prompted one village to open a pirate “stock exchange”, where locals can buy shares in up to 70 maritime companies planning raids.

But Professor James believes that the most important lesson firms can learn is one of strategy. He teaches his MBA class that one reason for the pirates’ success is that they avoid “symmetrical” conflict—challenging their targets head on by, for example, lining up against the Western navies patrolling the waters—battles they would surely lose. Instead, they use stealth and surprise, attacking targets at their weakest point. In this way, with only a dozen-or-so sailors, they wrest control of huge assets, in the form of oil tankers.

This is a lesson that serves smaller companies well as they look to take bites out of larger rivals. It might be foolish, for example, for a start-up to take on one of the traditional banks head-to-head—only another large bank could afford the pyrrhic battle that would ensue from it protecting its market. But by picking a small, localised fight a start-up can make an impression before a bank has had time to react. An example, says Professor James, is wonga.com. It has taken market share by attacking banks’ inflexible lending policies by offering loans for the exact amount and length of time the customer wants. It processes the loans extremely quickly and customers can even get immediate approval using an iPhone app.

Sometimes such an asymmetrical strike can shift the centre of gravity in an industry. Nintendo, a computer-games firm, was competing, and failing, against two much better-resourced rivals—Sony and Microsoft—in a sector where it seemed the only way to be successful was to win an arms race of processing power and ever more sophisticated technology. Nintendo opened a new avenue of attack based on the idea that consumers would enjoy getting physically involved in video games, using a motion-sensitive controller to control the on-screen action. So, using relatively cheap technology, it invented the Wii, in the process opening up a whole new market for previous non-gamers.

That smaller, nimble competitors make stealth attacks on larger rivals is a well-known phenomenon. Nonetheless, the way that larger companies can defend themselves against attack is a matter of much debate. Professor James says that the key is to quicken decision making. In his analogy, by the time the captain of an oil tanker has spotted the pirates’ inflatables it is too late; big ships take a long time to turn around. Similarly, once a large business has gone through the traditional process of observing an attack, orientating itself, deciding what to do about it and then acting (what Colonel John Boyd, an American military strategist, called an OODA loop) it is too late, the competition is upon it.

To help companies understand the best way to speed up their reaction times, the professor turned to another unpalatable source: insurgents in Afghanistan. Despite stressing that he believes the outcomes of their strategies to be repugnant, he nonetheless says that he admires the management structures that makes them successful.

One of the main lessons he learned, and which he teaches companies on his executive-education programme, Corporate Insurgency, is that insurgent leaders don’t micro-manage. Leaders of such movements are, in Professor James’s words, “brand agnostic”—they allow their brand to be adopted by autonomous local cells with little central control. The mistake big business makes is to try to protect the brand by making decisions from its headquarters; better, he says, to allow local managers to respond quickly to local events.

He even goes as far as to suggest that companies set up “commando” forces; small units which work outside the traditional command structure of the company and which have a level of autonomy—“not holding the long committee meetings, not having the extended approval and budgeting process”. If a big business as a whole cannot act as a small, nimble player, these business units can.