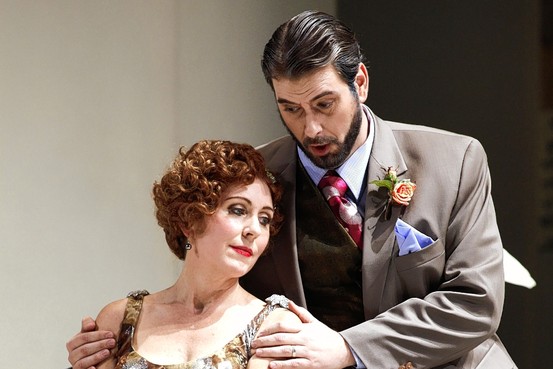 New York City Opera’s fall-season exploration of modern-family dysfunction continues with Strauss’s autobiographical “Intermezzo” (1924), a revival of City Opera’s 1999 Leon Major production, starring soprano Mary Dunleavy as the wacky wife. Billed as “a domestic comedy with symphonic interludes,” “Intermezzo” is a risky repertoire choice: It’s not a toe-tapper, and it requires great orchestral playing. Under conductor George Manahan, the City Opera Orchestra sounded scrappy and sloppy last Friday, rising only occasionally to the beauties of this score. Still, Ms. Dunleavy made it worth a trip, and so did designer Andrew Jackness’s mouthwatering early-20th-century Austrian furniture.

Strauss, who wrote his own libretto for “Intermezzo,” based the opera on his own marriage to the tempestuous Pauline. Christine Storch, the wife in the opera, cannot help quarreling with her composer-conductor husband, Robert, and complaining about her hard lot—abandoned at home as he travels for work. Yet she clearly adores him and brags about him to others. She takes up with a callow young admirer, but quickly recognizes that he is insubstantial compared to Robert. Even the plot’s central misunderstanding—after receiving a note that convinces her that Robert has a mistress, Christine sends him a telegram demanding an immediate divorce—is a demonstration of her love for him. Strauss’s depiction of the long-suffering Robert gives the male point of view the upper hand, yet the opera’s gracious and witty music tells us that for all its tumult, this is a marriage that works.

Ms. Dunleavy’s penetrating, silvery soprano and slight dizzy demeanor brought out Christine’s exasperating unreasonableness, yet the warmth in her portrayal demonstrated the character’s deeper feelings as she deftly balanced the comedy with a more nuanced psychological undercurrent. Baritone Nicholas Pallesen, who sang a strong Falstaff at Juilliard last year, brought authority and tonal beauty to Robert, his gravity belying his relative youth. Tenor Andrew Bidlack was entertaining as the lightweight and mercenary Baron Lummer, who loses Christine when he asks her for money. All three principals dealt ably with Strauss’s extremely wordy libretto, successfully putting across the English translation.

Mr. Jackness’s streamlined sets included a working toboggan slope and skating rink (with the principals on in-line skates) in addition to the handsome Vienna Secession furniture in the Storch home; four men, variously costumed as butlers and skating waiters, extended the director’s light-hearted touch to the scene changes. Martha Mann’s good-looking period costumes completed Mr. Major’s cleverly devised portrait of a termagant who, in the end, the audience can love as much as the composer obviously did.

City Opera filled out its fall program with a Leonard Bernstein concert last Saturday and Sunday titled “Lucky to Be Me.” Like the company’s illuminating production of “A Quiet Place,” it was further proof that Bernstein was a major composer in several genres, not simply a brilliant creator of musical-theater works who dabbled in the classical realm. The first half, with selections from “Songfest” (1977), Kaddish Symphony (1963) and “Mass” (1971), was nominally in the classical realm; some of the singers are currently performing in “A Quiet Place.” Baritone Christopher Feigum and mezzo Patricia Risley each brought haunting, restrained intensity to a song of lost love from “Songfest”: respectively, “To What You Said,” a Whitman setting, and “What Lips My Lips Have Kissed” by Edna St. Vincent Millay. George Steel, the company’s general manager and artistic director, took over the conductor’s baton from its music director, Mr. Manahan, and delivered an expansive, serene performance of Kaddish 2 from Kaddish Symphony, with soprano Talise Trevigne singing the Hebrew text, which showed orchestral capabilities that were absent in the “Intermezzo.”

The selections from “Mass” were tantalizing. “Mass” is an enormous work, an exploration—actually, an explosion—of the Catholic Mass that juxtaposes popular song and theater styles with some of Bernstein’s most sublime choral and orchestral writing. City Opera showcased some of its tamer sections: the exquisite “Simple Song,” beautifully sung by baritone Joshua Jeremiah; “Thank You,” given soaring innocence by soprano Sara Jakubiak; and the choral numbers “Gloria Tibi” and “Sanctus,” featuring the lively Brooklyn Youth Chorus as well as the company’s own adult and children’s choruses. It would have been fun, and more representative of the piece, to hear the company tackle some of the work’s wilder parts.

For the second half, City Opera brought on the Broadway experts for a romp through Bernstein’s musical-theater career. Highlights were Donna Murphy’s satirical venom in “One Hundred Easy Ways to Lose a Man” from “Wonderful Town”; Cheyenne Jackson’s suave “Lucky to Be Me” from “On the Town”; a passionate “Tonight” Quintet from “West Side Story” with Michael Cerveris, Mr. Jackson, Ms. Murphy, Kelli O’Hara and Sidney Outlaw; and the lovely, regretful “Some Other Time” from “On the Town” with Mr. Cerveris, Christine Ebersole, Mr. Jackson and Ms. Murphy.

It was also a treat to hear some lesser-known selections: “We Are Women,” a London addition to “Candide,” rendered with hilarious operatic brio by Victoria Clark and Ms. O’Hara, as well as Ms. Clark’s maniacal portrayal of two first ladies in “Duet for One” and a sumptuous performance of “Seena” by Mr. Outlaw (a young opera singer from whom I’d like to hear more), both from “1600 Pennsylvania Avenue.” Written with Alan Jay Lerner, “1600 Pennsylvania Avenue” closed after seven performances in 1976, and these two numbers suggest that it, like “A Quiet Place,” is due for another look. City Opera has a respectable track record with classic musicals, and who could be more appropriate for it than Bernstein?

Ms. Waleson writes about opera for the Journal.