Recipe for a commodity musical: (1) Take an ultrafamiliar piece of source material, preferably a hit movie; (2) adapt it for the stage in the most literal and obvious way imaginable, adding only extra jokes; (3) stir in a dozen or so innocuous songs that won’t divert the audience’s attention from how closely the stage version resembles its source. If you’re lucky, you get “The Addams Family”; if not, “9 to 5.” Either way, you get the kind of been-there-seen-that musical that has been blighting Broadway for the past decade and more. 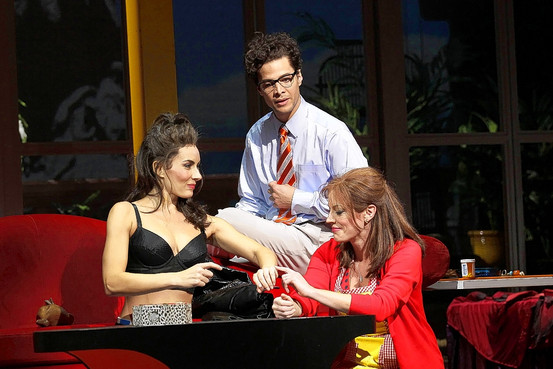 Laura Benanti, Justin Guarini and Sherie Rene Scott in ‘Women on the Verge of a Nervous Breakdown

So what does this formula have to do with “Women on the Verge of a Nervous Breakdown,” Lincoln Center Theater’s big-budget musical version of Pedro Almodóvar’s 1988 screen comedy about three women whom love has driven to the brink of madness? The answer is that Jeffrey Lane and David Yazbek, last seen on the Great White Way as the creators of “Dirty Rotten Scoundrels,” have now sought to commoditize not an off-the-rack Hollywood comedy but one of the most individual and significant Spanish-language films of the postwar era. It’s as if they’d tried to turn “Shoot the Piano Player” or “Wings of Desire” into a Big Mac musical—and the results, not at all surprisingly, are a flavorless mess.

Anyone who’s seen the film will recall the exhilarating zaniness with which Mr. Almodóvar told the story of Pepa (played here by Sherie Rene Scott), a TV actress-of-a-certain-age whose affair with Iván (Brian Stokes Mitchell), an older married man, blows up in her face when he dumps her for a younger woman (de’Adre Aziza), much to the disgust of his estranged wife (Patti LuPone). I’ve crammed all these details into a single sentence in order to suggest something of the film’s hectic charm (Mr. Almodóvar has said that he was trying to create the cinematic equivalent of a door-slamming stage farce). That said, I haven’t even gotten around to the concurrent dilemma of Candela (Laura Benanti), Pepa’s best friend, who is having a fling with a Shiite terrorist but would rather be playing house with Carlos (Justin Guarini), Iván’s shy son, even though he’s engaged to a chilly young woman (Nikka Graff Lanzarone) who won’t sleep with him.

For all its seeming lunacy, “Women on the Verge” is in fact a wholly serious comedy about a macho culture that encourages men to be faithless to the women who love them. The fact that Mr. Almodóvar is gay made it easier for him to portray that culture with a sharp-eyed detachment that did nothing to diminish his sympathy for his female characters. That’s part of what makes “Women on the Verge” more than a dizzy sex comedy: You always know whose side it’s on.

To turn so fully realized a work of cinematic art into an equally successful musical demands that it be subjected to a complete and thoroughgoing imaginative transformation. Otherwise, the new version will seem superfluous—which is what’s wrong with the stage version of “Women on the Verge.” Instead of breaking new creative ground, Mr. Lane’s book tracks Mr. Almodóvar’s setting and plot slavishly, salting his script with unfunny one- and two-liners that serve only to dilute the crisp, elliptical dialogue of the screenplay. As for Mr. Yazbek’s songs, they’re as forgettable as Muzak in a noisy restaurant, with dull music and even duller lyrics (“Tell me when did the wires get crossed / Tell me where the connection was lost”).

Given a high-powered cast like this one, everything might have come up roses anyway, but Ms. Scott, who is about as Spanish as I am, turns in a chirpy, lightweight performance that conveys nothing of Pepa’s sensuality. (Carmen Maura, who played the same character in the film, was the very embodiment of that savory quality.) Ms. Benanti, by contrast, makes a bold and energetic impression as Candela, galloping away with the best-in-show ribbon. Mr. Mitchell’s part, however, borders on outright invisibility, while Ms. LuPone’s spectacular gifts are wasted in a supporting role that allows her to do little but sing two forgettable songs and run around tearing her hair.

Bartlett Sher, Lincoln Center Theater’s resident director, has done his best to make interesting things happen onstage, but the results are scatty and unfocused from start to finish. Michael Yeargan’s sets and Catherine Zuber’s costumes do little more than mirror the candy-colored Madrid of the film, and Sven Ortel’s digital projections, which are evidently intended to evoke urban hubbub, merely add to the overall air of clutter. Except during Ms. LuPone’s big second-act number, nothing ever stops moving long enough for you to figure out which way to look.

I admired the original screen version of “Women on the Verge” so much that I feared I might be unfair in reviewing the musical, so I made a point of bringing along a friend who’d never seen the movie. Not only did she find the show dramatically pointless and musically tedious, but she said something that stayed with me long after I left the theater: “I don’t get it—why should I care about any of these crazy people?” When you’re watching the film, you never think of asking such a question. Mr. Almodóvar’s women are creatures of flesh and blood who effortlessly engage your emotions, whereas the women of the Lane-Yazbek version of “Women on the Verge of a Nervous Breakdown” are stick figures set up onstage for the sole purpose of selling tickets. That’s how commodity musicals work—and why this one doesn’t.

Mr. Teachout, the Journal’s drama critic, blogs about theater and the other arts at www.terryteachout.com.