A stormy home to explorers, traders and pirates. A prison to Napoleon.

We humans, as Shakespeare noted, are as ephemeral as dreams. So to us the oceans seem eternal. But they are not, a fact that geologists only learned in the mid-20th century. One hundred and ninety million years ago the Atlantic Ocean was born as the supercontinent Pangaea began to split apart. For now, it continues to widen at the rate of about an inch a year. But perhaps 180 million years hence it will have disappeared as the planet’s ever-restless tectonic plates once more coalesce into a new supercontinent, Pangaea Ultima. Roughly at this midpoint in the ocean’s existence, Simon Winchester, in “Atlantic,” tells us the story so far.

The Atlantic, Mr. Winchester notes, has had a relatively brief life as an important geographic feature of the globe. For most of European history, the Atlantic was simply “the great outer sea,” as opposed to the inner sea, the Mediterranean, and thought to encircle the world. It was, therefore, practically as alien and unknown as the back side of the moon and of little more worldly importance.

Two events at the end of the Middle Ages changed that decisively. In the 15th century, western Europeans developed the full-rigged ship, which was more capable than earlier vessels of dealing with the far greater distances and tougher conditions of the Atlantic. And in 1453, the Turks finally took Constantinople, closing off the old trade routes to the East, the source of spices, silk and other luxury goods.

With the development of new trade routes around the southern tip of Africa by the Portuguese and the discovery of the New World by Columbus, the center of the Western world moved decisively from the Mediterranean to the Atlantic. Venice and Genoa declined into insignificance. England, France and Spain, battening on the burgeoning trade and treasure of the New World, fought for mastery of the Atlantic. For the next 500 years, the Atlantic Ocean would be the cockpit of history.

The last naval battle in the Mediterranean of great strategic significance, the Battle of Lepanto, was fought in 1571. The first one not fought in the Atlantic thereafter was the Battle of Tsushima in 1904, between Russia and Japan, which announced Japan’s arrival as a great power. Control of the Atlantic sea lanes determined the outcome of both world wars in Europe. 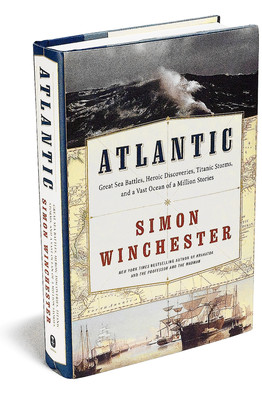 Mr. Winchester—a trained geologist and inveterate globetrotter—is well suited to tell the story. And he tells it with the sort of panache that he has brought to previous books, such as “Krakatoa,” about the volcanic disaster of 1883, and “The Professor and the Madman,” about the creation of the Oxford English Dictionary.

He begins his tale by looking out from the windswept heights of the Faroe Islands, a Danish possession on the edge of the Arctic Ocean. He ends it on the Skeleton Coast in Namibia on the southwest coast of Africa, 10,000 miles away. With much history, technology, economics and even poetry in between, “Atlantic” perhaps inevitably reads a bit like one of Edna Ferber’s sprawling, unruly novels. But it is no less readable for that.

There is much to relish here. I had no idea, for instance, that NASA’s five space shuttles were named for 18th- and 19th-century ships of exploration, two American and three British. (That’s why the space shuttle Endeavour is spelled in the British fashion: It is named for Capt. Cook’s ship.) I had never heard of William Marsden (1754-1836), who as secretary of the British Admiralty devised the ocean-sectioning “Marsden squares” that Lloyd’s has used ever since to chart the location of shipwrecks. (He also left a vast coin collection to the British Museum, wrote a definitive dictionary of Malay and in 1805 woke the First Lord of the Admiralty to tell him the happy outcome of the Battle of Trafalgar.)

The story of how the first telegraph transoceanic telegraph cable was laid in 1858 takes up only a few pages but is, typically for “Atlantic,” riveting. The 2,500 miles of cable, “about as thick as a man’s index finger” and weighing 1,500 tons, broke repeatedly; storms lashed the project and scoffers proliferated. Thoreau wanted to know why anyone would need to communicate from continent to continent—surely, he said, the news would consist of trivia on the order of “King of Prussia too ill to visit Queen Victoria.” The cable worked, sort of, for 15 days, then went dead. Eight years and two more attempts would be needed before a long-lasting success was achieved.

Inevitably, however, in painting so vast a canvas, Mr. Winchester commits the occasional miscue. For instance: Matthew Fontaine Maury, the father of the science of oceanography, was indeed appointed the first head of the U.S. Naval Observatory in 1844, but he didn’t serve in that position “for the next thirty years.” A Virginian by birth, Maury resigned his commission in 1861 and sided with the Confederacy, going to England to help acquire ships for its navy. He ended his days as a professor at the Virginia Military Institute.

Noting that more then 400,000 commercial flights cross the Atlantic annually, a wistful Mr. Winchester writes: “The casual public acceptance of transoceanic air travel has dulled us to the wonders and beauties and the preciousness of the sea below.” His lively, lyrical telling of the ocean’s story does much to sharpen our appreciation.

Mr. Gordon is the author of “An Empire of Wealth: The Epic History of American Economic Power.”