The story of the Civil War will be told in this series as a weekly roundup and analysis, by Jamie Malanowski, of events making news during the corresponding week 150 years ago. Written as if in real time, this dispatch will, after this week, appear every Monday. Additional essays and observations by other contributors, along with maps, images, diaries and so forth, will be published several times a week. For another perspective on the war, see this op-ed by Tony Horwitz. — The Editors

Seven days to go until election day, and the campaigns are reaching a rousing climax. In Manhattan, the at-long-last-united Tamany and Mozart Democrats mass in the evenings under torch lights and stomp up and down Broadway bellowing for their man Stephen Douglas, while in cities and towns upstate, young Republican Wide Awakes holler and whistle for their tiger Lincoln. Apple farmers fear for their crops, as there is hardly a basket that has not already been overturned and had a surrogate speaker installed on top. The outcome of one of the bitterest presidential elections in the history of the republic — or perhaps only the beginning of the outcome — is falling squarely onto the shoulders of New York. 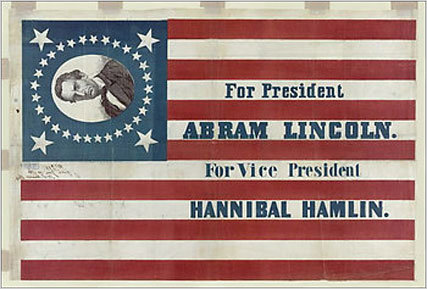 A campaign banner for Abraham Lincoln and his running mate.

Earlier this year, when Abraham Lincoln, the Illini lawyer, looked at the electoral map, he made a stunning discovery: if he could win 16 of the 17 Northern states plus the Western states of California and Oregon, he’d have enough votes in the electoral college to win the presidency.

Forget the tempestuous South; even if every Southern state fell into line behind one of his rivals — Senator Stephen Douglas of Illinois, Senator John Bell of Tennessee, Vice President John Breckenridge of Kentucky, the squabbling standard bearers of the factions of the suicidally splintered Democratic party — Lincoln could win with just the votes of the increasingly populated, firmly Free State North. And after the results from the state elections earlier this month — Pennsylvania had been suspect and Indiana iffy, but both tilted decisively towards the Republicans — the erstwhile rail-splitter looked like he just might convert his audacious gamble.

A procession of Lincoln supporters, known as the Wide Awakes, marching in New York on Oct. 3, 1860.

But one of Lincoln’s anti-slavery 16 always needed to be New York, with its muscular 35 electoral votes that are more than a fifth of the 152 needed to win.

And the race in New York, once thought to be a breeze, has tightened. In the past week, Thurlow Weed, the Republican Party political boss known for his unsavory methods and infallible acumen, has taken on a decidedly dyspeptic expression. The perpetually feuding Democratic factions in New York City finally coalesced behind Douglas, and the Democratic money spigots began to gush.

Simultaneously, chagrined Republicans across the state began to report that they had spent far too lavishly during the easy-going summer, and now had little or nothing left for the final push. “We are gaining so rapidly it is impossible to foretell the result,” Douglas’s man George Sanders has been telling associates.

Impossible, indeed. Even if Douglas was able to capture the Empire State, the Little Giant has no chance of winning an electoral college victory straight up. The Southern Democrats who walked out on him at their convention in the spring will surely snub him once again. They will split their votes between Breckenridge and Bell. Should Douglas snatch New York from Lincoln, no candidate will be able to claim a majority.

The choice next week, then, is not only between Lincoln and Douglas. It is, to put it another way, a choice between having someone clearly entitled to call himself president-elect (if Lincoln prevails), and muddy irresolution that will yield a second phase of electioneering to be held according to the secret and arcane processes of the House of Representatives. Our previous experiences with this process has shown it to be rife with pitfalls. In 1800, a deadlocked House nearly elected Aaron Burr, a man who had gone into the election hoping at most to become vice president. In 1824, the House picked John Quincy Adams, instead of Andrew Jackson, the man who had actually received the most electoral votes (but just a plurality, not a majority).

Should Douglas take New York, the Adams-Jackson scenario is almost certain to reoccur. Lincoln’s popular and electoral college pluralities will not factor. In the House, each state delegation gets one vote; to win the presidency, a candidate needs the votes of at least 17 of the 33 states. The Republicans control 15 delegations, the Democrats 14, the American Party (heir of anti-immigrant Know-Nothings) controls one. Maryland, Kentucky and North Carolina are split, but he has no support among the voters of those states.

It’s conceivable that Lincoln could wrestle away his home state, Illinois; the Democrats outnumber Republicans in the delegation 5 to 4, but Lincoln is enormously popular, and might take it. That would still leave him one frustratingly elusive vote short, with virtually no chance of finding it among the staunchly pro-slavery delegations that remain. In a real sense, then, next week we will witness not one election among four men, but two elections between two pairs: Lincoln vs. Douglas in New York, to see whether Honest Abe will be able to fill his inside straight; and should he fail, a secondary contest, Breckenridge vs. Bell, to see which of the pro-slavery candidates will enter the House proceedings as the favorite to exit as president.

But let’s not get ahead of events. Thurlow Weed never likes losing elections, and he will be especially loathe to lose the presidency in his own backyard. Already his appeals to Lincoln headquarters in Springfield have resulted in more campaign funds. Moreover, a veritable regiment of Republican big shots have been burning up the rails moving from Buffalo and Long Island and all points between, praising the Lincoln-Hamlin ticket. “New York is the Democrats’ forlorn hope,” James Gordon Bennett, the editor of the New York Herald, wrote last week. Exactly — and Thurlow Weed aims to crush it.

(To read more about this period, see “Lincoln for President,” by Bruce Chadwick, published by Sourcebooks, Inc., 2009.)

Jamie Malanowski has been an editor at Time, Esquire and Spy, and is the author of the novel “The Coup”.