No meat, no wool, no coffee or candles to read by, but plenty of high aspirations—and trouble.

In 1843, in the quiet middle of Massachusetts, a group of high-minded people set out to create a new Eden they called Fruitlands. The embryonic community miscarried, lasting only seven months, from June to January. Fruitlands now has a new chronicler in Richard Francis, a historian of 19th-century America. “This is the story,” he writes, “of one of history’s most unsuccessful utopias ever—but also one of the most dramatic and significant.” As we learn in his thorough and occasionally hilarious account, the claim is about half right.

The utopian community of Fruitlands had two progenitors: the American idealist Bronson Alcott and the English socialist Charles Lane. Alcott was a farm boy from Connecticut who had turned from the plough to philosophy. According to Ralph Waldo Emerson, his friend, Alcott could not chat about anything “less than A New Solar System & the prospective Education in the nebulae.” Airy as his thoughts were, Alcott could be a mesmerizing speaker. Indeed, his words partly inspired an experimental community in England, where he met Lane.

Lane has often been considered the junior partner in the Fruitlands story, merely the guy who put up the money (for roughly 100 acres, only 11 of which were arable). But Mr. Francis fleshes him out, showing him to be a tidier and more bitter thinker than Alcott, with a practical streak that could be overrun by his hopes for humanity.

As Mr. Francis notes, Alcott and Lane shared a “tendency to take moderation to excess,” pushing their first principles as far as they could go. One such principle was that you should do no harm to living things, including plants. As Mr. Francis explains: “If you cut a cabbage or lift a potato you kill the plant itself, just as you kill an animal in order to eat its meat. But pluck an apple, and you leave the tree intact and healthy.”

The Fruitlands community never numbered more than 14 souls, five of them children. The members included a nudist, a former inmate of an insane asylum, and a man who had once gotten into a knife fight to defend his right to wear a beard. Then there was the fellow who thought swearing elevated the spirit. He would greet the Alcott girls: “Good morning, damn you.” Lane thought the members should be celibate; Alcott’s wife, Abigail, the mother of his four daughters and the sole permanent woman resident, was a living reproach to this view. 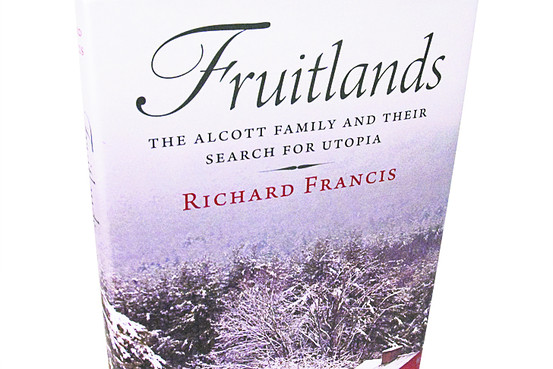 All of Fruitlands members, however, agreed to certain restrictions: No meat or fish; in fact nothing that came from animals, so no eggs and no milk. No leather or wool, and no whale oil for lamps or candles made from tallow (rendered animal fat). No stimulants such as coffee or tea, and no alcohol. Because the Fruitlanders were Abolitionists, cane sugar and cotton were forbidden (slave labor produced both). The members of the community wore linen clothes and canvas shoes. The library was stocked with a thousand books, but no one could read them after dark.

And how did the whole experiment go? Well, most of the men at Fruitlands had little farming experience. Alcott, who did, impressed Lane with his ability to plow a straight furrow; but Alcott was always a better talker than worker. The community rejected animal labor—and even manure, a serious disadvantage if you want to produce enough food to be self-sufficient. The farming side of Fruitlands was a dud.

But the experiment was indeed, as Mr. Francis claims, “dramatic.” The drama came from a common revolutionary trajectory in which “a group of idealists ends by trying to destroy each other.” “Of spiritual ties she knows nothing,” Lane wrote of Abigail. “All Mr. Lane’s efforts have been to disunite us,” she confided to a friend, referring to her relations with Bronson. Even the usually serene Bronson agonized: “Can a man act continually for the universal end,” he asked Lane, “while he cohabits with a wife?” By Christmas, which he spent in Boston, Bronson seemed on the verge of dissolving his family. In the new year he returned to Fruitlands, but he had a breakdown. This was no way to run a utopia, and the experiment ended.

Was Fruitlands “significant”? In Mr. Francis’s reading, the community “intuited the interconnectedness of all living things.” That intuition, he believes, underlies our notions of the evils of pollution and the imminence of environmental catastrophe, as well as our concerns about industrialized farming. The Fruitlanders’ understanding of the world, he argues, helped create a parallel universe—an alternative to scientific empiricism—that is still humming along in the current day.

Perhaps so. Certainly many New Age and holistic notions, in their fuzzy and well-meaning romanticism, share a common ancestor with the Fruitlands outlook. But the result is not always benign. It was the Fruitlanders’ belief, for instance, that “all disease originates in the soul.” One descendant of this idea is the current loathsome view that cancer is caused by bad thoughts.

Though obviously sympathetic to the Fruitlands experiment, Mr. Francis gives us enough facts to let us draw our own conclusions. He records Bronson and Abigail’s acts of charity, already familiar to us from their daughter Louisa’s novel “Little Women” (1868). But he also retells less admiring stories, of their petty vindictiveness and casual callousness. Along the way he adumbrates the ways in which idealism can slide into megalomania.

Mr. Francis reports a conversation that Alcott once had with Henry James Sr., the father of the novelist Henry and the philosopher William. Alcott let it drop that he, like Jesus and Pythagoras before him, had never sinned. James asked whether Alcott had ever said, “I am the Resurrection and the Life.” “Yes, often,” Alcott replied. Unfortunately, Mr. Francis fails to record James’s rejoinder: “And has anyone ever believed you?”