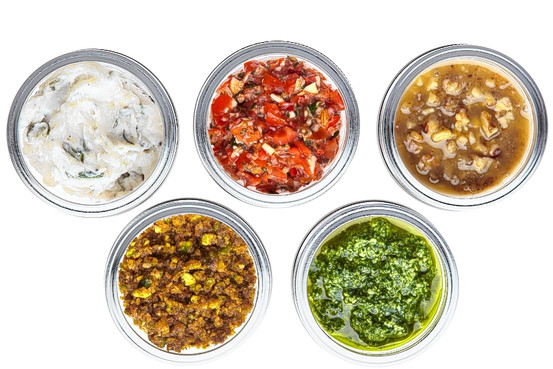 Pesto is a gift from summer—a nutty, herby distillation of a sweet-smelling, sunshine-loving herb. But fall doesn’t have to mean giving it up altogether. The classic basil version is just one interpretation of an open-ended technique: The word “pesto” has its roots in the Italian word for “pestle,” and it means the technique of using a mortar and pestle (or more often nowadays, a food processor) to make a flavorful paste combining garlic, nuts and oil with vegetables or herbs. In pesto’s birthplace, ingredients like parsley, mint and olives commonly end up in the mix. Fall, especially now when spinach and broccoli are approaching their peak, is the perfect time to experiment—and to try one of these more seasonable pesto recipes from top chefs around the country. Make extra: It’ll keep in an airtight container in the fridge for a few days. Better yet, freeze it in a Ziploc bag and you can stay sauced through the winter.

Use it: Tossed with fusilli and ricotta salata

In a food processor, blend a half-cup each of olive and grapeseed oils with a half clove of garlic until garlic is finely chopped. On medium speed, incorporate a cup of walnuts. Process on high until mixture is smooth. Season with sherry vinegar, salt and pepper. —chef Marc Vetri, Vetri in Philadelphia

Use it: Tossed with fresh pappardelle or farro penne

Use it: Tossed with hot spaghetti

Blanch a quarter-cup raw pistachios in boiling water for two minutes. Remove, cool and process with a quarter-cup breadcrumbs, three tablespoons of olive oil, two tablespoons of chopped mint, a pinch of Aleppo pepper (available in Middle Eastern markets) and a garlic clove, pulsing until well mixed and smooth. Season with salt and pepper to taste. —chef Chris Cosentino, Incanto in San Francisco

Use it: Tossed with roasted potatoes or Brussels sprouts

In a mortar and pestle, mash a quarter clove of garlic and a pinch of salt until a paste begins to form. Add a teaspoon each of chopped rosemary and black pepper and continue to crush. Add a quarter pound of lardo, and mash ingredients together until pesto is smooth. Season to taste. —chef Cesare Casella, dean of The Italian Culinary Academy in New York

Use it: Spread on toasted slices of crusty bread

In a mortar and pestle, pound three garlic cloves and a pinch of salt into a mash. Pound six sprigs worth of marjoram leaves into mix. Do same with parsley leaves until you have rough paste. Cover paste with three-quarters cup olive oil. Add half-cup chopped walnuts. Taste for salt. —chef Russell Moore, Camino in Oakland, Calif .

Use it: Spooned over sautéed mushrooms or grilled sea bass

Blanch one bunch of rapini for about four minutes, shock in a bowl of ice water, squeeze dry and chop finely. Purée the rapini, two garlic cloves, one cup olive oil, and a pinch of salt in a food processor until very smooth. Transfer to bowl. Stir in a half-cup grated Parmesan. Sauté a third of a pound of porcini mushrooms in butter until they are colorless and soft. Cool, purée and fold into the rapini mix. —chef Ethan Stowell, Staple & Fancy Mercantile in Seattle

Use it: Tossed with a short twisted pasta like gemelli

Purée a half-cup of flat leaf parsley, two garlic cloves, a cup of olive oil, a large pinch of salt and up to eight turns of the pepper mill in a blender until mixture is smooth. Taste and adjust seasoning. —chefs Frank Falcinelli and Frank Castronovo, Frankies Spuntino, Brooklyn, N.Y.

Use it: Brushed on sliced crusty bread before toasting

Blend five tablespoons of pumpkin seeds, two cups of basil, a clove of garlic and salt until pureed. Pour into a large mixing bowl. Add two-thirds cup grated Parmesan and a quarter-cup olive oil, stirring until the pesto is smooth and creamy. —chefs Tony Mantuano and Sarah Grueneberg, Spiaggia in Chicago

Use it: Spooned over cheese ravioli

Pulse a half-cup pecans, a half-cup parsley leaves, a quarter-cup Parmesan, a half-cup pecan oil and a teaspoon of kosher salt in a food processor until combined, but not totally puréed. Transfer to bowl. Fold in four chopped dates and two teaspoons balsamic vinegar. —chef Alon Shaya, Domenica in New Orleans

Use it: Spooned over duck, pork or ricotta spread on grilled bread

Use it: Spooned over scallops or stuffed inside an omelet