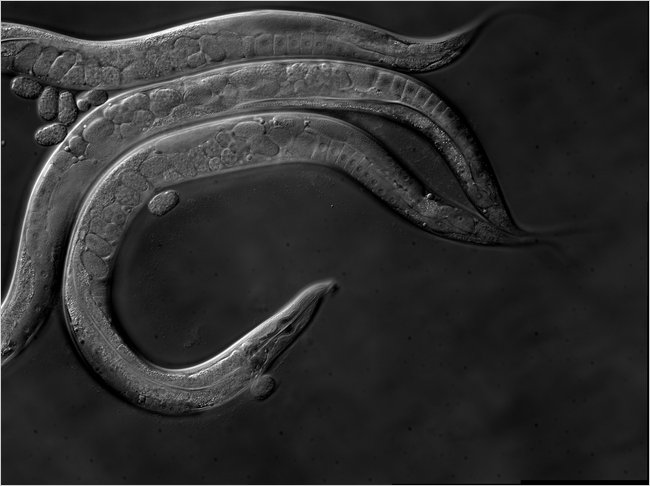 A new report suggests that the biological clocks of worms, like C. elegans, and humans may wind down over time for similar underlying reasons.

Modern medicine, a healthy lifestyle and a shot or two of Botox might leave a woman feeling youthful for decades, but by her early 30s, her reproductive ability is already in rapid decline.

Now, a study in the journal Cell suggests that one of the favorite animals for experiments in modern science, the tiny worm C. elegans, may provide new insight into female fertility. For the worm, as for women, it is diminished egg quality, not quantity, that marks the first sign of reproductive aging.

Coleen Murphy, a molecular biologist at Princeton University, and colleagues found that as C. elegans ages, its oocytes, or unfertilized eggs, start to degrade because of increased secretion of a protein called transforming growth factor beta, or TGF-beta. The same protein is found in humans and other mammals.

The researchers also experimented with mutant worms that had low TGF-beta activity levels. In these worms, reproductive ability was lengthened and egg quality did not degrade.

In women, too, aging brings about a decline in the quality of oocytes, leading to a greater chance of birth defects like Down syndrome. Scientists have tested the protein in mice and found a similar effect, but in humans it may not play exactly the same role.

“The dream would be that you could give a woman in her early 30s a supplement or a drug to keep her oocytes healthy as long as possible,” she said. “We have treatments now that extend life span, but nothing extends our reproductive span.”

There are limits, as witnessed in some of the mutant worms. Although their reproductive ability increased, their life span did not, and reproducing in old age — 13 days for the worms — was fatal.