David Starkey’s new book takes on the most cherished of British institutions.

In our modern age nothing or no one has done as much to maintain the mystique of the British royal family as television. Near the end of his spicily compelling history “Crown & Country,” David Starkey describes the surge of excitement he felt as a youngster watching Queen Elizabeth II’s coronation.

“On 2 June 1953, I, then a boy of eight in my Sunday best, gathered along with countless millions more to watch the coronation on a neighbour’s television which had been bought especially for the occasion. It was the first time that I had seen television or a monarch. And I have never forgotten it.”

For Mr. Starkey it was the beginning of a life-long obsession with the British monarchy and a special fascination with the court intrigues of the Tudor dynasty—a second volume of his entertaining history about Henry VIII, titled “Henry: Model of a Tyrant,” will be published next year.

With “Crown & Country”—which brings together and updates two previously published volumes, “The Monarchy of England: The Beginnings” and “Monarchy: From the Middle Ages to Modernity”—Mr. Starkey re-examines the role of an institution, the British/English monarchy, that has been in existence for nearly 2,000 years.

Starting with the first Roman invasions of Britain by Julius Caesar in 55 and 54 BC and ending with a chapter calling into question whether a future archbishop of Canterbury would be prepared to crown and consecrate Prince Charles and his wife Camilla Parker-Bowles, Mr. Starkey never ceases to wield a historian’s greatest weapon: utter self confidence.

Rather than simply provide a straight, by-the-numbers biography of Britain’s kings and queens down the years, Mr. Starkey has done something trickier and more ambitious by digging into the ideas underpinning monarchy and the philosophies of those who formulated them.

Ever the populist, Mr. Starkey describes these kingly advisers and publicists as “the shock troops of monarchy.”

“When they were talented and imaginative, monarchy flourished: when they were not, the crown lost its sheen and the throne tottered.”

So this is as much a history about intelligent and ambitious priest-ministers like Thomas Wolsey (whom Mr. Starkey describes as “spin doctor in chief”) or Roger of Salisbury, as it is about the kings under whom they served—Henry VIII in Wolsey’s case and Henry I in Roger of Salisbury’s. 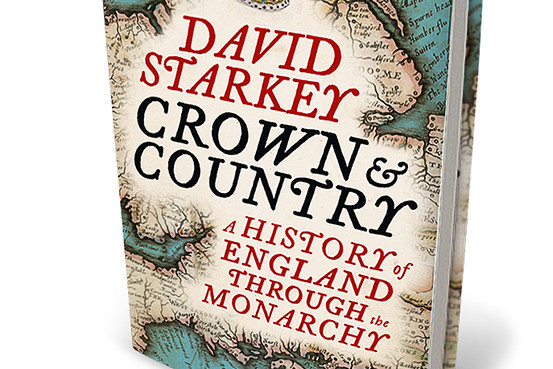 But with Mr. Starkey controversy is never very far away, especially when he states that the Saxon Conquest, as opposed to the Norman Conquest, was the turning point in England’s history. School teachers up and down the land will no doubt be pulling out their red pens in protest.

“They [the Anglo Saxons] would invent a new politics which depended on participation and consent, rather than the top down autocracy of Rome,” Mr. Starkey argues by way of justification, before hailing the House of Wessex for producing a king such as Alfred “The Great.”

“Like all Anglo-Saxon kings,” Mr. Starkey writes,” Alfred was a man of action and a warrior. But he was also, uniquely for his own age and for long after, a true philosopher-king.”

Indeed, it is a lack of intellectual rigor that Mr. Starkey finds most disappointing among British monarchs, though there are notable exceptions such as Edward I, Henry VIII and especially his daughter Elizabeth I.

In the English press Mr. Starkey has been particularly scathing about Elizabeth II, whose coronation so enthralled him as a youngster. In “Crown & Country” he is rather more circumspect, though no less dismissive: “Her [the queen’s] education, at the hands of a devoted governess, was modest and undemanding . . . riding, along with dogs became a lifelong passion. Books, on the other hand, remained alien: reading was for state papers.”

Of course, the burning question is whether Mr. Starkey believes the monarchy has outlived its usefulness. Though he never comes right out and says it, this is certainly one very disillusioned English historian.

For Mr. Starkey the rot set in at the beginning of the 18th century with the Hanoverians, the second wave of German-born kings to arrive in England after the Saxons.

Never one to mince his words, Mr. Starkey describes the Hanoverians, of which the current House of Windsor is really an extension, as “the least able and attractive house to sit on the British throne.” He goes even further by declaring that “[it] was the awkward, unattractive personalities of the first two Hanoverian kings [George I and George II] which accelerated” the advent of the British premiership and “made it irreversible.”

By the end of “Crown and Country” Mr. Starkey snaps that a civil inauguration for Charles might even be for the best. “It would be a recognition that the United Kingdom has become—as it has indeed—the Royal Republic of Britain.” And while on the subject of sacred cows, Mr. Starkey muses that it is “America today which best embodies the ideas of freedom, power and empire which inspired that great denizen of Stowe, William Pitt, in the reign of George II.”

Does such provocative rhetoric merely mean Mr. Starkey is planning his next book tour? Or is the writing really on the wall for the British monarchy? Only time will tell.

Mr. Grey is a writer based in Paris.