A 2nd century map of Germania by the scholar Ptolemy has always stumped scholars, who were unable to relate the places depicted to known settlements. Now a team of researchers have cracked the code, revealing that half of Germany’s cities are 1,000 years older than previously thought.

The founding of Rome has been pinpointed to the year 753. For the city of St. Petersburg, records even indicate the precise day the first foundation stone was laid.

Historians don’t have access to this kind of precision when it comes to German cities like Hanover, Kiel or Bad Driburg. The early histories of nearly all the German cities east of the Rhine are obscure, and the places themselves are not mentioned in documents until the Middle Ages. So far, no one has been able to date the founding of these cities.

Our ancestors’ lack of education is to blame for this dearth of knowledge. Germanic tribes certainly didn’t run land survey offices — they couldn’t even write. Inhabitants this side of the Rhine — the side the Romans never managed to occupy permanently — used only a clumsy system of runes.

According to the Roman historian Tacitus, people here lived in thatched huts and dugout houses, subsisting on barley soup and indulging excessively in dice games. Not much more is known, as there are next to no written records of life within the barbarians’ lands.

That may now be changing. A group of classical philologists, mathematical historians and surveying experts at Berlin Technical University’s Department for Geodesy and Geoinformation Science has produced an astonishing map of central Europe as it was 2,000 years ago. 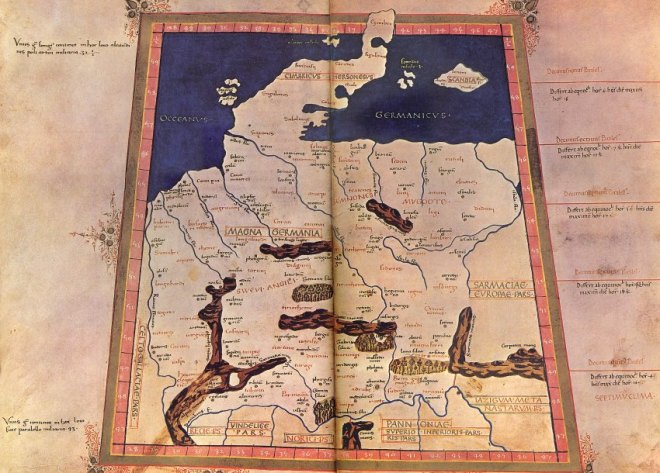 A 2nd century map of Germania by the scholar Ptolemy has always stumped scholars, who were unable to relate the places depicted to known settlements. Now a team of researchers have cracked the code, revealing that half of Germany’s cities are 1,000 years older than previously thought. 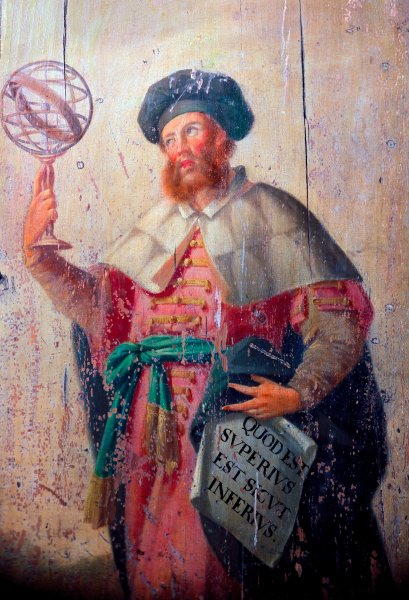 In 150 AD, the mathematician and astronomer Ptolemy embarked on a project to depict the entire known world. Living in Alexandria, in the shadow of its monumental lighthouse, the ancient scholar drew 26 maps in colored ink on dried animal skins. This photo shows an 18th century depiction of Ptolemy.

The map shows that both the North and Baltic Seas were known as the “Germanic Ocean” and the Franconian Forest in northern Bavaria was “Sudeti Montes.” The map indicates three “Saxons’ islands” off the Frisian coast in northwestern Germany — known today as Amrum, Föhr and Sylt.

It also shows a large number of cities. The eastern German city that is now called Jena, for example, was called “Bicurgium,” while Essen was “Navalia.” Even the town of Fürstenwalde in eastern Germany appears to have existed 2,000 years ago. Its name then was “Susudata,” a word derived from the Germanic term “susutin,” or “sow’s wallow” — suggesting that the city’s skyline was perhaps less than imposing.

This unusual map draws on information from the mathematician and astronomer Ptolemy, who, in 150 AD, embarked on a project to depict the entire known world. Living in Alexandria, in the shadow of its monumental lighthouse, the ancient scholar drew 26 maps in colored ink on dried animal skins — a Google Earth of the ancient world, if you will.

One of these drawings depicts “Germania Magna,” the rainy realm inhabited, according to Roman sources, by rough barbarians whose reproductive drive, they said, was giving rise to an alarming number of tribes.

Ptolemy demonstrated extensive knowledge of this remote area, indicating the locations of mountains, rivers and islands. An index lists 94 “poleis,” or cities, noting their latitude and longitude accurately to within a few minutes.

The map shows settlements as far afield as the Vistula River in present-day Poland, where Burgundians, Goths and Vandals once lived, and mentions the Saxons for the first time. It appears Ptolemy was even familiar with the Swina River, which flows from the Szczecin Lagoon into the Baltic Sea, near the present day German-Polish border.

It seems surprising that an academic living along the Nile had such detailed knowledge of northern Europe — and it’s certain that Ptolemy never took his own measurements in the Germanic lands. Instead, researchers believe he drew on Roman traders’ travel itineraries, analyzed seafarers’ notes and consulted maps used by Roman legions operating to the north.

Yet the data the ancient geographer used is distorted. Errors of scale crept in as he transcribed the Earth’s sphere to the flat plane of a map. Ptolemy believed the northern lands to be narrower and more elongated than they are and bent Jutland in Denmark and Schleswig-Holstein in Germany too far to the east.

Ptolemy also failed to accurately connect the different parts of his map. Mistakes worked their way in despite his attempts to locate calibration points to tie together his patchwork of geographical information. The inevitable result was confusion.

Linguists and historians have tried repeatedly to decode the yellowed document — in vain. Among researchers, it came to be known as an “enchanted castle,” a mystery no one could crack. Access to Germany’s prehistory was believed closed off forever.

Now the ancient map appears to be revealing its secrets at last. For the first time, a high-caliber team of experts in the field of surveying and mapping came together in a bid to solve the map’s perplexing puzzle. The Berlin-based team pored over the recalcitrant data for six years, working together to develop a so-called “geodetic deformation analysis” that would help to correct the map’s mistakes.

The result is an index that pinpoints the hometowns of the legendary figures Siegfried and Arminius to within 10 to 20 kilometers (6 to 12 miles). A new book, “Germania und die Insel Thule” (“Germania and the Island of Thule”), has just been published about the project. The publisher, Darmstadt-based WBG, calls it a “sensation.”

The essential question is whether the new data is accurate. Ptolemy’s “Geography” is preserved only in duplication. The copy so far considered the most authentic is an edition produced around the year 1300 and kept by the Vatican.

But the team of experts in Berlin had the great fortune to be able to refer to a parchment tracked down at Topkapi Palace in Istanbul, Turkey, the former residence of the Ottoman sultans. The document, consisting of unbound sheepskin pages with writing in Roman capital letters, is the oldest edition of Ptolemy’s work ever discovered. A reproduction of this version is due to be published next year.

Using the parchment as a reference and drawing on their own geographical expertise, the academics from Berlin seem to have finally managed to bridge the gap back to the realm of Odin and Valhalla.

‘Lost Places in Our Past’

The new map suggests that minor German towns such as Salzkotten or Lalendorf have existed for at least 2,000 years. “Treva,” located at the confluence of the Elbe and Alster Rivers, was the precursor to Hamburg; Leipzig was known as “Aregelia.”

All this offers up rather exciting prospects, since it makes half the cities in Germany suddenly 1,000 years older than previously believed. “Our atlas is a treasure map,” team member Andreas Kleineberg says proudly, “and the coordinates lead to lost places in our past.”

Archaeological interest in the map will likely be correspondingly large. Archaeologists’ opinions on the Germanic tribes have varied over the years. In the 19th century, Germany’s early inhabitants were considered brave, wild-bearded savages. The Nazis then transformed them into great heroes, and in the process of coming to terms with its Nazi past, postwar Germany quickly demoted the early Germanic peoples to proto-fascist hicks. The Romans, it was said, had to put up a border wall between themselves and the nuisance Germans before they could finally get some peace.

More recent research proves this view to be complete invention. New excavations show that the Germanic groups were anything but isolated — quite the contrary. Veritable hordes of Roman traders crossed the border to deal in amber, pomade, smoked fish and leather with their neighbors. Caesar mentioned that his people traded with the “Sueben,” the Swabians of southwestern Germany. As far back as the first century AD, a Roman knight traveled from Carnuntum, a legion camp near Vienna, to the Baltic Sea coast to trade in amber.

Roman diplomats were also eager to intervene in their neighbors’ affairs, bribing tribal princes, organizing assassinations and supporting their favorites all the way to the throne. Excavations in the state of Lower Saxony in August 2008 even uncovered a battlefield containing the remains of 3rd century weapons. Closer inspection revealed that a Roman legion equipped with catapults had advanced as far as the Harz region in central Germany in a lightning campaign probably intended to punish insubordinate tribes.

These soldiers didn’t have to struggle through wastelands and swamps to get there. “We were able to locate 11 settlements along the highway that started at Moers on the Rhine and reached as far as the Sambia peninsula in present day Kaliningrad,” Kleineberg explains.

Most Germanic sites appear to have been situated along rivers and at road junctions, indicated by the word “furd” included in many place names. “Lupfurdum,” the predecessor to Dresden, for example, was located at a shallow, fordable spot along the Elbe River. Hanover, then “Tulifurdum,” was a place where the Leine River could be crossed.

Researchers believe Ptolemy’s map now allows them to trace the path followed by amber traders from the Vienna area up to Gdansk Bay as well.

It was primarily surveyors with the Roman army, which appears to have advanced as far as the Vistula River, who collected information on the barbarians’ lands. Dieter Lelgemann, a geodesist in Berlin, is firmly convinced that “Ptolemy was drawing on work done by military engineers.”

The ancient astronomer indicated cities’ exact locations down to minutes of degrees. These coordinates, once decoded, indeed often turn out to line up precisely with sites where archaeologists have previously found Gothic or Teutonic houses and grand burial tombs erected for tribal princes.

The evidence suggests that the researchers in Berlin have truly cracked the code. The group appears, for example, to have accurately located three particularly important Germanic sites, known to Ptolemy as “Eburodunum,” “Amisia” and “Luppia.” The new calculations put these sites at the present day cities of Brno, Fritzlar und Bernburg (Saale), all places already possessing unusually distinguished recorded histories:

The next question is what these metropolises of early northern Europe looked like. Old maps mark them with massive defensive towers, but this makes little sense, since the Germanic tribes didn’t have stone structures, only wood and clay mortar.

But this doesn’t mean the villages this side of the Alps were unimpressive. On this point too, experts are adjusting their views. A town on the Elbe River called Hitzacker, for example, has yielded up astonishing archaeological finds over the years, such as magnificent tombs filled with silver dishes. This year, archaeologists added houses, a large farmstead and ironworking ovens to their finds here. The area under investigation extends across more than 10 hectares (25 acres).

This settlement too can be found in the new atlas. In Ptolemy’s day, it was called “Leufana,” a center of the Germanic Lombards.