New words and the dictionary of the future 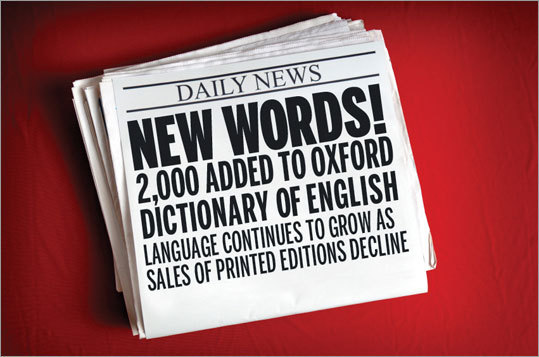 The end of summer must be the perfect moment to put out a dictionary-related press release: There’s not much other news, and everyone’s thinking about the new school year approaching. So it’s no surprise that the recent announcement that 2,000 new words and phrases have been added to the new third edition of the Oxford Dictionary of English has received so much media attention.

The Oxford Dictionary of English isn’t the venerable Oxford English Dictionary, but rather its smaller, younger counterpart, a single-volume dictionary of contemporary English published mainly for a UK audience. (The comparable US edition is the New Oxford American Dictionary, of which I was the editor for the second edition in 2005.)

Its roster of new words will probably not be all that new to regular readers of The Word — in fact, one, chillax, was the subject of this column a while ago. They’re the usual mix of tech words (microblogging, netbook, paywall, tweetup), science words (geoengineering, carbon capture and storage), words drawn from current affairs (exit strategy, toxic debt, deleveraging, vuvuzela), and popular culture (steampunk, LBD).

The majority of the list, though, is what I would call PR bait: bromance, chill pill, cool hunter, defriend, turducken, wardrobe malfunction. It’s not that these words aren’t worth knowing — they certainly are, and they’re all “real” words — it’s just that these short lists are chosen more to generate coverage (and brand awareness) than for their usefulness. And they work, too: A headline on the blog of the New York Observer read “Defriend Anyone Who Tells You To Chillax About New Words In The Oxford Dictionary.”

In the old days, before Google, Wikipedia, and online dictionaries, these new-words-in-the-new-edition lists were intended to signal the strength and power of a dictionary: Its lexicographers and researchers had discovered and judged all of the cutting-edge vocabulary in science, art, technology, popular culture, and sports, and selected just what you needed to know.

But the Internet has changed the kinds of information we expect to have at our fingertips, and how we expect to gain access to it. The idea of a single reference source, either in print or online, seems a bit quaint, like an old-timey carnival barker. We enjoy the idea of stepping right in and seeing the show, but we don’t expect much more than an ironic thrill. Even Nigel Portwood, the CEO of Oxford University Press, the dictionary’s publisher, sees the end coming: He was quoted in the (UK) Daily Mail as saying that, given current sales declines, he expects that the printed dictionary — not just Oxford’s, but printed dictionaries in general — will have a lifespan of another 30 years.

Mr. Portwood’s remarks attracted quite a bit of attention, and worry — as did another bit of dictionary news, the announcement that the third edition of the immense Oxford English Dictionary, whose completion date is still estimated to be at least a decade away, will be digital only, never appearing in printed form. (The press later backtracked and said that “no decision has been taken” as to whether there would be a print version of the third edition.)

Abandoning the book format might sound like a surprising move by a publication that might seem to be the most bookish book in the entire world of books — its current edition runs to 20 volumes and nearly 300,000 entries — but in fact the OED has been embracing its digital side for a long time. Oxford spent more than $13 million and five years digitizing its second edition in the late 1980s and published a CD-ROM version (cutting-edge at the time!) in 1992. And the OED Online is the Oxford dictionary that currently updates itself the most frequently, at least in public: The OED publishes online updates of new words every quarter. And though these receive far less press attention than other “new word” announcements, they are usually more interesting to the word-nerd, as the OED covers a wider range of texts and times. (The lists are freely available at oed.com, although the actual entries are only accessible by subscribers.)

The OED’s new-words lists aren’t just shiny pop-culture crowd-pleasers — although they do have those as well, including Generation Y (added this past March) or server farm (added in June). They tend toward obscurities such as rhandir, a share of inherited land; ancient words like halirift, a veil worn by a holy woman; or nonce-words (words used only once) such as ridibund, meaning “inclined to laughter, happy.” In the OED model, the limiting factor isn’t the number of pages available, but the staggering amount of editorial time historical lexicography requires. Because the OED concerns itself primarily with tracking the histories of words, behind every new word — and especially behind every old one — is quite a bit of work.

Or, as Jesse Sheidlower, an OED editor based in the United States, put it on his Twitter feed recently: “Antedating three different senses of _action_. A reasonable day.”

Erin McKean is a lexicographer and founder of Wordnik.com.