Rising street violence in Venezuela is beginning to hurt the president among his constituency.

When a photograph of 12 chaotically strewn, naked corpses at the Bello Monte morgue in Caracas ran on the front page of the Venezuelan daily El Nacional 10 days ago, Hugo Chávez reacted with indignation.

But his ire was not directed at morgue management or, since the dead were most likely murder victims found in the street, at those responsible for public security in the capital.

Mr. Chávez was angry with the newspaper. He immediately blasted the wider press for its recent reports on Venezuelan violence, which has reached epic proportions. A Chávez-controlled tribunal soon issued a ruling prohibiting the publication of such graphic images. After an international outcry of censorship, the ruling was amended to apply only to El Nacional and one other newspaper.

It is a curious reaction from a strongman who has nationalized huge swaths of the economy and taken control of congress, the judiciary and the national electoral council. He is capable of depriving his opponents of property rights, due process and free speech, and with this power he has effectively starved and gagged most dissent. Some of his adversaries are in prison; many have been disqualified from running for office. 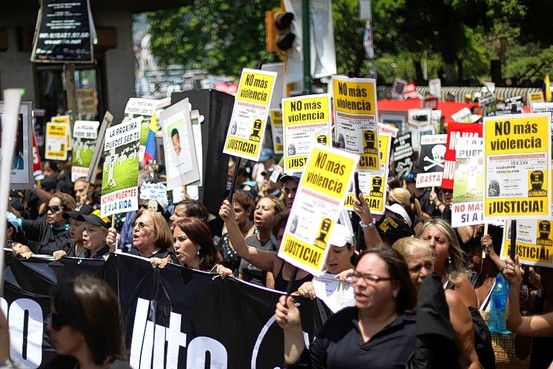 Escalating crime may be sapping support for the president among poor Venezuelans. Protest signs read ‘No more violence, justice.’

Why, then, should the morgue photo cause alarm? Perhaps because in the runup to the Sept. 26 national assembly elections, the issue of violent crime in poor neighborhoods risks awakening voters.

Though the government has stopped publishing official crime statistics, the nongovernmental Venezuelan Observatory of Violence (OVV) has claimed there were 16,047 murders in 2009. This is up from 14,589 in 2008 and 4,550 in 1998, the year Mr. Chávez was first elected.

What is more, OVV may have understated the problem. On Friday El Nacional reported that it obtained a leaked report by the government’s own National Statistics Institute showing that 19,113 Venezuelans were murdered in 2009. Using the U.S. State Department’s population estimate for Venezuela at the end of 2009, that’s a rate of 67 murders per 100,000 inhabitants. (The Justice Department’s 2008 murder rate for the U.S. was 5.4 per 100,000 inhabitants.)

Mr. Chávez cannot distance himself from this reality. Shortly after he took office in 1999, he told the nation that stealing by the poor may be justified, and he has since become famous for using rhetoric that foments envy and hatred throughout the nation. Drug trafficking has also flourished during his rule while law enforcement and the courts have collapsed. OVV says that in 91% of all 2009 homicide cases there has been no arrest.

According to El Nacional, the National Statistics Institute report also shows that almost 16,000 of the 2009 victims came from lower-income classes, the core of Mr. Chávez’s support.

Reports I have received from Caracas indicate that the poor, particularly women, are beginning to see a link between chavismo and their misery, and they are listening to the competition. If so, it would not be unreasonable to expect Mr. Chávez’s United Socialist Party of Venezuela to take a hit in a free and fair election.

Of course this is an uphill climb since the electoral system is rigged. International missions, from the Organization of American States to the European Union, have not been allowed to observe the election process, and since 2003 Mr. Chávez has blocked any audit of voter registry.

A Chávez “reform” of the electoral system last year has intensified an existing problem of some votes carrying more weight than others. For example, the lightly populated state of Amazonas—which is heavily dependent on government handouts and where it is difficult to monitor fraud—now gets one “proportional” seat for every 43,000 voters. The anti-chavista state of Zulia gets one for every 700,000 voters.

The government owns almost all television stations and can force the few private stations to run its messages. According to the independent Venezuelan electoral watchdog group, Sumate, during the first half of this year Mr. Chávez was on television an average of three hours per day.

There is also intimidation. Venezuelan pollster Alfredo Keller says that according to his polls more than 40% of the electorate believes that their vote is not secret. With so many dependent on government jobs, this perception is bound to have an effect, as will Mr. Chávez’s threats that if his party fares poorly in the elections, there will be hell to pay.

Facing similar odds in 2005, the opposition chose to boycott the national assembly elections, and Mr. Chávez’s backers won all the seats. Now the opposition has decided to compete within the crooked system. It has largely united to back anti-chavista candidates, and it hopes that a population hungry for change can defend its voting rights on election day.

Critics say these quixotic candidates are legitimizing a scam. That may turn out to be true. But the government’s panicked reaction to the publicized crime statistics is telling. At some point, at the polls or otherwise, Mr. Chávez knows he will have to contend with the failure of his revolution.