There can’t be a better place on Earth to deliver a mea culpa speech than the floor of the U.S. House of Representatives. Not the Oval Office, not the British Parliament, not even the stage of a televangelist’s ministry. The House—the world’s greatest confessional.

In the past quarter century, there have been two great House mea culpa speeches—the one Charlie Rangel gave last week, and former Speaker of the House Jim Wright’s resignation speech in May 1989.

In most great speeches—from a Lincoln, Roosevelt or Churchill—the goal is to inspire, to lift up the spirit. The House mea culpa speech, by contrast, is intended to lift only the speakers’s spirit. It is an exercise in remorse, rationalization and, not least, rage.

Messrs. Rangel and Wright took to their favorite floor to request what House rules aptly call “a point of personal privilege.” That is, a speech in defense of one’s reputation or conduct.

Both the Wright and Rangel speeches were made amid a bonfire of ethics charges. Congressional ethics is a lot like sin, falling across an expansive scale of grievousness—from the venial (for which a reprimand) to the mortal (eternal expulsion from the House and possibly prison). It is no surprise that the transgressors tend toward the theological in describing what they did.

Jim Wright: “All of us are prone to human error.”

With Congress’s most senior, tenured members, the road to regret seems to fall into familiar ruts.

Both men’s actions (as they made clear in their speeches) seem penny ante. Jim Wright’s problems involved a friend’s rent-free apartment for his wife and outsized royalty fees from selling copies of his autobiography to lobbyists. Charlie Rangel is struggling with allegations involving unreported Caribbean condo income, rent-stabilized apartments and extra-legal enthusiasm soliciting funds for his legacy, the Rangel Center in New York City.

Just as the House ethics posse was closing in on them, both men threw lavish parties for themselves. Even here, the political animal tends to repeat behavioral patterns. 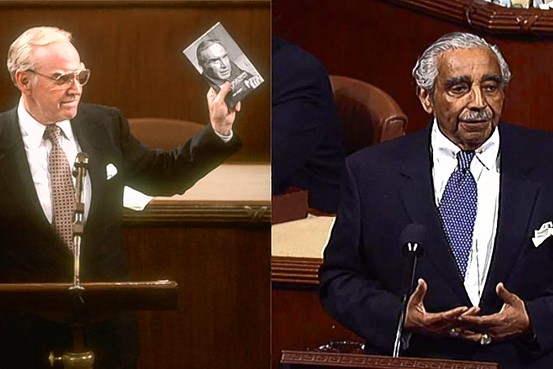 Jim Wright and Charlie Rangel step up to the confessional.

Jim Wright, a 22-termer, threw his at the Will Rogers Coliseum in Fort Worth for 10,000 admirers. Guests jammed the Plaza Hotel’s Grand Ballroom for Mr. Rangel’s party last week. “This damn sure ain’t no funeral, is it?” said Charlie Rangel, a 40-year man. “People at home resent the hell out of it,” said Jim Wright.

The Rangel and Wright orations before the House differed in one significant way. Jim Wright offered himself up as an act of majestic sacrifice: “I’m going to make you a proposition. Let me give you back this job you gave to me as a propitiation for all of this season of bad will.”

Charlie Rangel, however, is in no mood to propitiate anyone, not even his beloved and beleaguered fellow Democrats: “I love my country. I love my Congress. . . . But you are not going to tell me to resign to make you feel comfortable.” Indeed, for Mr. Rangel, his seat in Congress has become a mystical truth: “I am not going away. I am here.” Elected ergo sum.

Both men spoke at length about the unfairness of the House’s internal investigations process. Both said the ethics committee dragged their investigations across a year, with leaks of the charges against them dribbling into the media, but with no chance to formally answer the charges.

There is something to this. Ethics accusations can be a crude weapon. But there is also something of God’s rough justice in seeing these piddling rules pull the congressional gods back to Earth.

In 1977, at the end of Koreagate—an influence-peddling scandal in the House—the ethics committee’s special counsel, Leon Jaworski, said Congress was incapable of policing itself. In the years after, we tried independent counsel investigations for other public officials, which proved worse, metastasizing into obsessive Inspector Javert manhunts.

So for better and often worse, Congress still polices itself. And a Charlie Rangel or a Jim Wright ends up on the floor of the House pleading, as a last personal privilege, that his wonderful and very long life as a Beltway potentate has taken an unfair turn.