A Confederate who refused to quit fighting but ended up a model citizen.

In August 1865 the French military garrison at Matehuala, in central Mexico, fully expected to be slaughtered by the Mexican troops besieging the outpost. Napoleon III had imposed Emperor Maximilian I on the country the year before, supplanting Mexican President Benito Juarez. Now forces loyal to Juarez were fighting back, driving for Mexico City. Only Matehuala stood in their way.

Then word arrived that the French might have an unlikely savior: Jo Shelby, a renowned Confederate cavalry general who had refused to surrender when the Civil War ended in April. Having led a contingent of Southerners into Mexico, many of them soldiers, he now offered his help to the French. He was ready to attack the Mexican army, he declared—President Juarez, after all, enjoyed the U.S. government’s support, and Shelby was not fond of the U.S. government.

As historian Anthony Arthur notes in “General Jo Shelby’s March,” Maximilian would ultimately refuse Shelby’s broad offer of support. But the beleaguered French garrison at Matehuala welcomed him. Shelby’s adjutant, Maj. John Newman Edwards, later described the cavalry attack on Juarez’s forces: “Shelby’s charge was like a thunder-cloud. Nothing could live before the storm of its revolver bullets. Lurid, canopied in smoke-wreathes, pitiless, riding right onward.” The Mexicans fled “in hopeless and helpless flight.” Shelby and his men were fêted by the grateful French for three days. 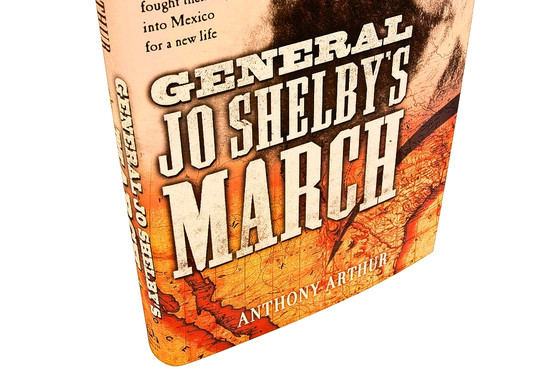 The remarkable story of how Gen. Jo Shelby (1830-97)—his full name was Joseph Orville, shortened to J.O., or Jo—came to be fighting for France in Mexico is the focus of Mr. Arthur’s work, a page-turner of a history that the author completed shortly before his death last year. Another volume or two would be needed to capture Shelby in full, but Mr. Arthur sketches in enough of Shelby’s early life and Civil War exploits to give us a vivid sense of the unbowed, renegade commander who headed south of the border.

Shelby grew up with a passion for horses and riding in Lexington, Ky., but when he turned 21 and inherited $80,000 from the estate of his father (who had died when Shelby was 5 years old), he moved to Waverly, Mo., and started a rope-manufacturing business. There, on the Missouri River in the western part of the state, the wealthy, charismatic young man built a mansion and bought steamboats. He also took part during the 1850s in the bitter fighting between advocates of the Kansas Territory’s entry into the Union as a slave-free state and “border ruffians,” many of them pro-slavery Missourians. Shelby, a gifted horseman who counted himself among the proponents of slavery, emerged from the bloody campaign (in the end, Kansas was admitted as a free state in 1861) with a reputation as a fierce and wily fighter.

Shelby’s legend only grew with the outbreak of war and his appointment as the commander of all Confederate cavalry forces between the Arkansas and Mississippi rivers. The soldiers he led directly were known as the Iron Brigade. In the fall of 1863, the brigade launched a wide-ranging raid that covered more than 1,500 miles, destroyed 10 Union forts and, perhaps most important, bolstered morale throughout the South.

A grim note in Shelby’s story occurred in April 1864 at Marks’ Mills, Ark. Shelby led a technically brilliant capture of a Union supply train consisting of 240 wagons and five pieces of artillery, guarded by 1,500 men—all killed or captured by Shelby’s raiders. But the Confederates also killed dozens of black teamsters, servants and escaped slaves. They were shot down, a Union witness said, like dogs. Mr. Arthur says that Shelby’s rampaging soldiers were beyond his control: “No orders, threats, or commands could restrain the men from vengeance on the negroes,” according to Maj. Edwards, an eyewitness. (Revenge for what? Attempting to gain their freedom?) In any case, author doesn’t present any evidence that the general regretted the shameful episode.

At war’s end, Shelby led an embittered expedition of perhaps a thousand men to Mexico. Their number included about 200 of his former troopers, soldiers from other Confederate commands and what must have seemed like half the Confederate government, including the governors of Missouri, Louisiana, Tennessee and Texas.

Shelby and the others didn’t enter Mexico with military action in mind; they were simply determined to make a new start far from the hated Yankees. But the ex- Confederates rode into the middle of another civil war. As Mr. Arthur relates, Shelby’s ragtag group ran a gantlet of bandits, Apaches and Mexican rebel forces—including those at Matehuala—as it headed to Mexico City to offer the emperor military assistance. Maximilian received Shelby cordially but astutely judged that aligning himself with former Confederates would only inflame the U.S., which already resented France’s incursion in Mexico.

But Maximilian invited the Southerners to stay on and granted them land where they could farm. Shelby did take up farming in Mexico—briefly. When France withdrew its support of Maximilian in 1867, Shelby and the other Americans who had come to Mexico after the Civil War scrambled to escape the doomed regime.

Shelby—back in America barely two years after Appomattox—embarked on an astonishingly successful campaign to rehabilitate his reputation. He restarted his life in Missouri and renounced his support for slavery, becoming such a model citizen that in 1893 President Grover Cleveland appointed him U.S. marshal for western Missouri.

One of Shelby’s first acts as marshal was to name a black man as a deputy. Racists denounced the old rebel general, who responded with a written statement. He had “no patience with that sentiment that gropes always among the tombstones,” Shelby said, “instead of coming out into the bright light of existing life and conditions.” As Mr. Arthur concludes, Shelby was a “man who fought bravely for a doomed cause, and who ultimately reconciled himself not only to defeat, but to the fact that his cause had been fatally flawed by the greatest evil”—slavery.

Mr. Ferguson is a Rossetter House Foundation Scholar of the Florida Historical Society.