Marginalia and forgotten mementoes are often squirreled away inside conventional books. What will become of such treasures in the age of the ebook? 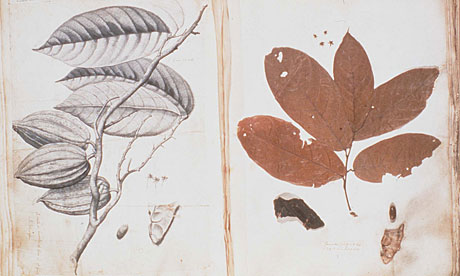 The first cocoa bean to be scientifically described in 1670, when chocolate was still unknown in Europe, glued inside a book more than 300 years old.

The growing sense that books may be about to become redundant is producing a good deal of sentimental chatter on – where else? – the internet. As the growing popularity of ebooks makes us wonder whether print and paper will soon become the sole preserve of collectors and retro-heads, book-lovers seem to be dwelling particularly on the physical aspects of the paper object. It’s not the words that will disappear, after all, just the way they are revealed to us.

As a book-lover myself, all this talk is manna, even if the eagerness to drink deep stems from a vague fear that soon the well may soon dry up. It’s been bitter-sweet, for instance, to read recently about the notes left by Penelope Fitzgerald in her “battered, treasured, much-used library”; about “that keenest of annotators, Samuel Taylor Coleridge” and his coining of the term marginalia to describe his habit; and about Sylvia Plath’s strange (yet perfect) impression of Jay Gatsby waiting in the driveway of the Buchannan House where his love Daisy is patching things up with her unpleasant husband Tom: “knight waiting outside, dragon goes to bed with princess”.

These scribbles in the margins already seem like messages from a dying age. Will the next generation of writers leave similar guides to the workings of their minds for the future? Perhaps – but not in a format we can currently comprehend.

Meanwhile, some of the most touching reflections I’ve come across on the subject don’t just concern writing left in books, but material objects. The kind of memento that can bring back floods of memories and images when left to mature in a book for a few years – but would entirely bork the inside of an electronic device. For instance, not long ago, the always-interesting Guardian writer PD Smith posted the following sweet and necessarily short message on Twitter:

“Reading one of my late father’s Virginia Woolf books, I discovered some wild flowers between the pages. Not something you’d find in an ebook.”

The combination of those flowers with Virginia Woolf seemed peculiarly moving to me. It also provoked a rich stream of speculation about mutability; about the elder Smith’s enthusiasms and interests; and about his feelings for beauty (or, perhaps, conversely, a feeling that Woolf would be more useful pressing flowers than being read). I was so intrigued that I decided to shake through my own shelves.

Disappointingly, the experiment brought few results. A few well-thumbed travel books turned up a richly evocative crop of bus tickets, museum passes and smears of foreign food. Otherwise, most of the volumes I opened contained no more than the post-it notes I use to mark pages and a few ragged and uninteresting scrap-of-paper booksmarks.

But, then again, perhaps it’s better that way. Perhaps a good part of the interest depends on the mystery that comes when you are slightly removed from the books and objects in question. Certainly, one of the most delicious blogs currently on the internet depends on this evocative magic. Called The Age Of Uncertainty, it concerns the musings and frequently hilarious wonderings of the pseudonymous “Steerforth”. Steerforth deals in secondhand books and frequently writes about the things that drop out of them and the associations they provoke about Ordinary Lives – as he terms them in a wonderful post that deserves quotation at length:

“As much as I love working with books, it is the paraphernalia that comes with them which really excites me. Hidden in a novel that is trying to encapsulate the human condition, I often find a photograph or note which manages to say more in a simple image or sentence than most authors could achieve in 200 pages.

“That’s not a slur against writers. It’s more about authenticity and intent. Photograph albums tell us so much and so little at the same time. The albums lie, in that they create a false impression of lives lived in perpetual happiness and sunshine – but each photo is unintentionally revealing. Behind the smiles and blue skies, there is a subtext: this is what I want my life to be.

“The gulf between the people we’d like to be and who we actually are is pure Richard Yates.”

I leave it to you to read on and discover the heartbreaking end to that article – and indeed to immerse yourself in the other delights that Steerforth unravels. Before then, however, I’m curious about the pieces of memory you may have stashed away on your shelves. What’s inside your books? Have you ever found anything interesting inside anyone else’s? And what will happen to such moments of discovery if e-books do take over? Share all here – before it’s too late…