Why so many colleges are education-free zones.

If you have a child in college, or are planning to send one there soon, Craig Brandon has a message for you: Be afraid. Be very afraid.

“The Five-Year Party” provides the most vivid portrait of college life since Tom Wolfe’s 2004 novel, “I Am Charlotte Simmons.” The difference is that it isn’t fiction. The alcohol-soaked, sex-saturated, drug-infested campuses that Mr. Brandon writes about are real. His book is a roadmap for parents on how to steer clear of the worst of them. 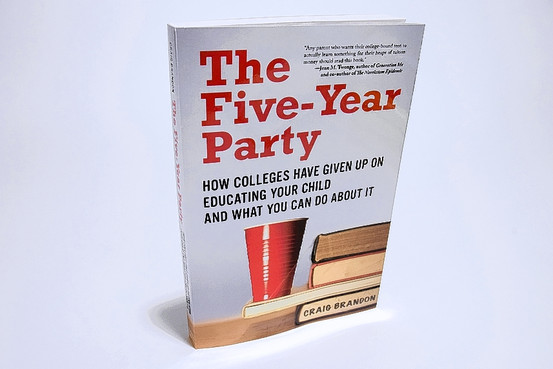 Many of the schools Mr. Brandon describes are education-free zones, where students’ eternal obligations—do the assigned reading, participate in class, hand in assignments—no longer apply. The book’s title refers to the fact that only 30% of students enrolled in liberal-arts colleges graduate in four years. Roughly 60% take at least six years to get their degrees. That may be fine with many schools, whose administrators see dollar signs in those extra semesters.

In an effort to win applicants, Mr. Brandon says, colleges dumb down the curriculum and inflate grades, prod students to take out loans they cannot afford, and cover up date rape and other undergraduate crime. The members of the faculty go along with the administration’s insistence on lowering standards out of fear of losing their jobs.

As a former education reporter and a former writing instructor at Keene State College in New Hampshire, Mr. Brandon has both an insider’s and an outsider’s perspective on college life. While his focus is on the 10% of America’s 4,431 liberal-arts colleges that he categorizes as “party schools,” he applies many of his criticisms more widely—even to the nation’s top-tier universities.

Mr. Brandon is especially bothered by colleges’ obsession with secrecy and by what he sees as their misuse of the Federal Educational Rights and Privacy Act, which Congress passed in 1974. Ferpa made student grade reports off-limits to parents. But many colleges have adopted an expansive view of Ferpa, claiming that the law applies to all student records. Schools are reluctant to give parents any information about their children, even when it concerns academic, disciplinary and health matters that might help mom and dad nip a problem in the bud.

Such policies can have tragic consequences, as was the case with a University of Kansas student who died of alcohol poisoning in 2009 and a Massachusetts Institute of Technology student who committed suicide in 2000. In both instances there were warning signs, but the parents were not notified. Ferpa’s most notorious failure was Seung-Hui Cho, the mentally ill Virginia Tech student who murdered 32 people and wounded 25 others during a daylong rampage in 2007. Cho’s high school did not alert Virginia Tech to Cho’s violent behavior, professors were barred from conferring with one another about Cho, and the university did not inform Cho’s parents about their son’s troubles—all on the basis of an excessively expansive interpretation of Ferpa, Mr. Brandon says. He recommends that parents have their child sign a Ferpa release form before heading off to college.

There are several omissions in “The Five-Year Party.” One is the role of college trustees, who share the blame for the failure of the institutions over which they have oversight. Mr. Brandon also gives the faculty a pass. It is hard to believe that professors are as powerless or as cowed as they are portrayed here. The book’s chief villains are a new breed of college administrators, whom Mr. Brandon says have more in common with Gordon Gekko than Aristotle.

Oddest of all is Mr. Brandon’s failure to demand that students take responsibility for their conduct. He depicts them as victims of schools that either coddle them or take advantage of them and of a culture that discourages them from growing up. Mr. Brandon estimates that only 10% of the students at party schools are interested in learning. If that is right, colleges will have little incentive to shape up until their customers—students and parents—demand better.

No one who has been following the deterioration of higher education in recent years will be surprised by the portrait of campus life in “The Five-Year Party.” The author’s contribution is to compile news reports and scholarly studies into one volume, along with original reporting on campuses across the country. The galley proofs that went out to reviewers included an appendix listing 400-plus “party schools,” including many well-known private and state institutions. For whatever reason, that appendix does not appear in the book’s final version. Mr. Brandon does, however, point the finger at many schools in specific examples in the text.

“The Five-Year Party” is a useful handbook for parents to pack when they take their teenager on a college tour, and its list of suggested questions is smart. My favorite: How many of the school’s professors send their own children there? More broadly, Mr. Brandon urges parents not to assume that their child is college material and to consider community colleges and vocational schools, whose curriculums tend to focus on teaching specific job skills.

Mr. Brandon’s ideas for policy reform are uneven. A proposal for legislation that caps tuition increases to the rate of inflation may be unconstitutional if applied to private institutions and is a bad idea in any case; Washington shouldn’t be dictating what schools can charge. Requiring students to pass a test administered by the College Board in order to get a diploma is another bad idea. It would be expensive and subject to ideological abuse. Repealing Ferpa might be the best place to start: The adults who pay the bills need to know what is happening to their kids on campus.

Ms. Kirkpatrick is a former deputy editor of the Journal’s editorial page.