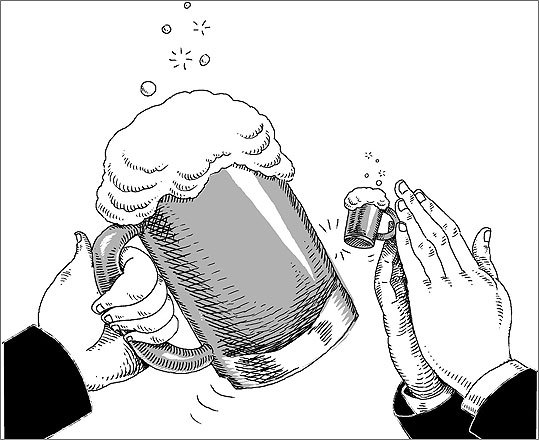 Fame, enemy of your town

The reality show genre has flourished during the past decade, bringing fame and fortune to many people. But along with the good comes the bad. Two economists at Occidental College in Los Angeles analyzed crime rates in Laguna Beach before and after the debut of MTV’s popular reality show of the same name, which followed the social lives of some of the town’s affluent teenagers. Compared with a similar neighboring beach town (Dana Point), Laguna Beach experienced an increase in nonresidential burglaries, auto thefts, and rapes, ostensibly caused by the town’s newfound fame. Residential crime might have increased too but, as the authors speculate, may have been blunted by the prevalence of gated communities.

Don’t go after insurgents too hard

The question of how aggressively to target insurgents has been a central issue in the Afghanistan policy debate, especially during the recent transition from General McChrystal to General Petraeus. Current policy is focused on defense, rather than attack, to avoid civilian casualties, but many, including the troops themselves, have complained. Now, a detailed analysis from a team of civilian researchers and a US Army counterinsurgency expert has come down on the side of restraint. The average counterinsurgency incident generates an additional six violent insurgent incidents during the following six weeks. Revenge appears to be the driving factor, especially given that the insurgent response is locally concentrated.

Unlike 19th-century schools and contemporary private schools, most public school systems have a separate “middle school” for grades 6 through 8 or 7 and 8. Is this good for students? Researchers at Columbia University analyzed achievement data from New York City public schools and found that students who transitioned from an elementary school to a middle school did worse in math and English than students in K-8 schools who didn’t transition. Parents and students also reported being less satisfied with middle schools. The authors estimate that the impact of this situation — if it persists past middle school — could be worth thousands of dollars in lifetime earnings, and it appears to be more severe for already low-performing students. It does not appear to be caused by any difference in resources or class size but may have something to do with the effect on young adolescents of bringing so many students together from different elementary schools.

Rockoff, J. & Lockwood, B., “Stuck in the Middle: Impacts of Grade Configuration in Public Schools,” Journal of Public Economics (forthcoming).

For many people, dealing with bad memories can be an ongoing nightmare. Some research, though, suggests that simple acts can help. A new study has even demonstrated that psychological closure is aided by literal enclosure. First, people were asked to write about a regrettable decision or an unfulfilled desire. Next, some were asked to seal their disclosure in an envelope before handing it in, and some were just asked to hand it in. Those who had sealed their disclosure in an envelope felt better afterwards. Likewise, people who read a news story about a baby’s tragic death were subsequently able to forget more of the story and get more closure if they placed the story in an envelope.

Kevin Lewis is an Ideas columnist.