Roughly 50 men and women in the Warsaw Ghetto chose a special form of resistance. In a secret archive, they documented their path to doom for future generations, chronicling the Nazis’ crimes as they were being perpetrated. 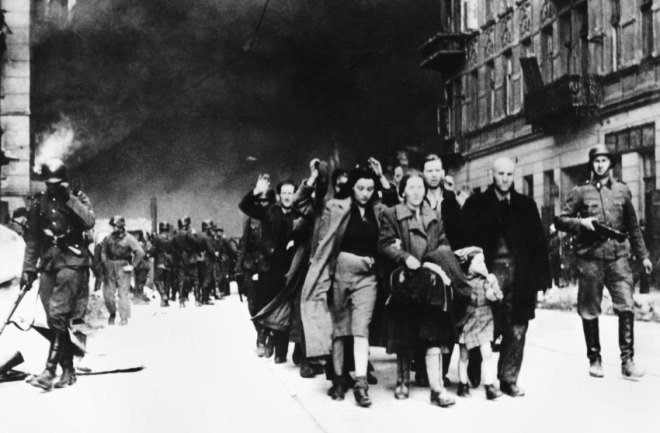 Jewish men, women and children being marched out of the Warsaw Ghetto in May 1943.

David Graber was 19 when he hurriedly scribbled his farewell letter. “I would be overjoyed to experience the moment when this great treasure is unearthed and the world is confronted with the truth,” he wrote.

While German soldiers combed the streets outside, Graber and his friend Nahum Grzywacz buried 10 metal boxes in the basement of an elementary school on Nowolipki Street in Warsaw’s Jewish ghetto. It was Aug. 2, 1942.

The boxes were dug up more than four years later. By then, Graber and Grzywacz were long dead, murdered like almost all of their roughly 50 collaborators. Only three survived the Nazi terror. They provided the information that led to the recovery of the boxes.

The buried treasure consisted of about 35,000 pieces of paper that a group of chroniclers had collected and used to document how, during World War II, the German occupiers had deprived Warsaw’s Jews of their rights, tormented them and, finally, killed them in the death camps. “These materials tell a collective story of steady decline and unending humiliation, interspersed with many stories of quiet heroism and self-sacrifice,” writes American historian Samuel Kassow. His book “Who Will Write Our History?: Rediscovering a Hidden Archive from the Warsaw Ghetto,” which has now been published in German translation, throws a new light on the exceptional source material.

Jews also collected documents and wrote diaries elsewhere in Europe during the Holocaust, but the Warsaw archive is the most comprehensive and descriptive collection of all. The Polish capital was home to Europe’s largest Jewish community, which became a magnet for many talented scientists and writers. As one female author wrote, she hoped that her account would be “driven under the wheel of history like a wedge.” Contributions like hers would turn the clandestine archive into probably the most nightmarish body of text ever written about the Holocaust.

The group called itself Oyneg Shabes, or “Sabbath Joy,” because it usually convened on Saturday afternoons, beginning in November 1940. The chief thinker of the group, which included a large number of intellectuals, journalists and teachers, was Emanuel Ringelblum, a historian born in Galicia in 1900. He had written a doctoral dissertation at the University of Warsaw on the history of the city’s Jews prior to 1527, and he was part of the Jewish self-help organization “Aleynhilf.”

Two weeks before the outbreak of World War II, Ringelblum attended the World Zionist Congress in Geneva as an envoy of the Marxist party Poalei Zion. The other delegates told him it was too dangerous to go back to Poland and urged him to stay in Switzerland, but Ringelblum wanted to be with his wife Yehudis and their nine-year-old son Uri. He had hardly returned home before German troops invaded Poland and captured Warsaw soon afterwards.

In October 1940, the occupation authorities decreed that all Jews were to be moved to a separate residential district. Workers then built a three-meter wall around the area. The Germans also relentlessly drove Jews from the surrounding countryside into the Warsaw Ghetto. Before long, half a million people were living in an area of only four square kilometers (1.5 square miles).

Ringelblum and his fellow members of Oyneg Shabes quickly recognized the dimensions of the drama and began to document it for posterity. They collected decrees, posters, ration cards, letters, diaries and drawings — documents of horror in Yiddish, German and Polish.

One of the documents specified the average daily calorie allotment for 1941, according to which Germans were to receive 2,613 kilocalories, Poles 699 and Jews only 184. The ghetto residents had to smuggle in food to survive. The archive used wages and prices on the black market to conduct market research and prepare sample calculations for a family of four.

Like ethnologists, the chroniclers went about investigating their environment, scientists studying their own surroundings. They issued standardized questionnaires and conducted hundreds of interviews with refugees and people on the verge of starvation.

Between 1940 and 1942, about 100,000 people died of hunger, exposure to cold temperatures and disease. In November 1941, Ringelblum, describing the deaths around him, wrote: “The most terrible thing is to look at the freezing children…Today in the evening I heard the wailing of a little tot of three or four years. Probably tomorrow they will find his little corpse.”

The archive held an essay contest to encourage traumatized children to tell their stories. A 15-year-old girl described how her mother had died next to her: “During the night, I felt her becoming cold and stiff. But what could I have done? I lay there until the morning, still clinging to her body, until a neighbor helped me lift her out of the bed and place her on the ground.”

Outside, residents constantly ran the risk of being stopped by a German policeman and then beaten or shot. The ghetto residents even had a name for a particularly dangerous bottleneck-like street: “The Dardanelles.”

Smuggled Evidence of the Extermination Program

In 1942, the chroniclers began to receive dramatic news from other parts of the country. Refugees told of mass shootings and synagogues burned to the ground. One refugee told the chroniclers how the SS had used gas to kill people in railroad cars in Chelmno west of Warsaw.

The industrial-scale mass killing had begun, leading many to ask themselves when the “Hell of Polish Jewry,” as the title of one of the documents in the archive read, would reach Warsaw. Several German officials had promised Jewish elder Adam Czerniakow that the Warsaw Ghetto would be spared. But on July 22, 1942, SS officer Herman Höfle announced that the “resettlement” had begun. A few days later, the archivists’ helpers buried the first of the metal boxes.

The Gestapo and the Jewish police rounded up the residents and took them to the “transshipment point,” where the transports to the Treblinka death camp began. A particularly cynical proclamation, dated July 29, lured the starving Jews with the promise that anyone who went to the point voluntarily would receive a ration of three kilos of bread and one kilo of marmalade. In an effort to deceive those who had been left behind, deportees were forced to sent reassuring postcards home from the death camps.

The archivists had already started studying the Holocaust while it was in full swing. In several instances, they managed to smuggle evidence of the extermination program abroad, including to the BBC in London. Ringelblum hoped, in vain as it turned out, that his group had “completed a meaningful historical task and perhaps saved hundreds of thousands from extermination.”

The ghetto was quickly cleared. According to a statistic in the archive, 99 percent of all children had already been deported by November 1942. There were still 60,000 people living in the residential area, most of them men who worked in the workshops. Many turned over their personal reflections to the archive, documents of great emotional power.

Abraham Lewin, a teacher, described how his wife fell into the clutches of the henchmen: “There was a solar eclipse, and it was completely dark. My Luba was apprehended at a roadblock. I still see a shimmer of hope shining in front of my eyes. Perhaps she will be spared. And if not, what may God prevent?”

Another teacher, Natan Smolar, mourned his “only, beloved daughter Ninkele,” whose third birthday the family had just celebrated. “There were so many toys, and there was so much noise and play, so much happiness and shouting of children. And today Ninkele is no more, and her mother is gone, and so is my sister Etl.”

Those who had remained in the ghetto were plagued by feelings of guilt. They complained “that the Jews allowed themselves to be lead like sheep to the slaughter.” One man wrote: “If only we had all climbed over the ghetto wall and stormed the streets of Warsaw, armed with knives, axes or even stones — then perhaps they would have killed 10,000 or 20,000, but never 300,000!”

There are hardly any documents left on the armed resistance that eventually did erupt, in April 1943. The Germans brutally suppressed the uprising. SS brigade leader Jürgen Stroop had the buildings burned down, one after another, and the main synagogue blown up. On May 16, 1943, he reported: “The former Jewish residential area of Warsaw no longer exists.”

By that time, historian Ringelblum and his family had already fled to the non-Jewish section of Warsaw. He spent the last few months of his life together with about 40 men, women and children in a 23-by-16-foot cellar underneath a greenhouse that belonged to a Polish vegetable merchant. Day after day, Ringelblum sat at the end of a long table between the rows of bunk beds, surrounded by his books and lists.

The hiding place was discovered in March 1944, when the girlfriend of the Polish man betrayed him after they had separated. Ringelblum was taken to the notorious Pawiak Prison, where his captors tortured him in the hope that he would reveal details about Jewish resistance fighters. Then the Germans shot the chronicler of their crimes, together with his family and the other prisoners.

Only six days before his hiding place was discovered, Ringelblum wrote to a friend about his archive: “If none of us survives, at least this will remain.”