The Democratic Party’s capture by public unions and professional politicians is strangling much of liberalism’s agenda.

Numerologists may have to be called in to explain the historic magnitude of the year 2010. After 60 years of doubling down on their spending, 2010 became the year governments from Greece to California hit the wall. (That Athens became the symbol of the democracies’ compulsion to spend themselves into oblivion is an eeriness we’d rather not ponder.)

In the distant future, some U.S. historian in kindergarten today will write about Congressman David Obey’s contribution to the splitting apart of American liberalism’s assumptions about the purpose of government. Mr. Obey of Wisconsin is chairman of the House Appropriations Committee, the spenders. People have said for years that government robs Peter to pay Paul. Now brother is ripping off brother. Mr. Obey plans to send $10 billion to school districts to avoid teacher layoffs and will pay for it in part by taking money from several school reform programs, such as Race to the Top.

President Obama has threatened a veto. Keep an eye on it. If this Democratic president stops that Democratic congressman from knee-capping school reform to protect unionized teachers from the world the rest of us live in, you can mark down August 2010 as a first step back from the crack-up. That would be the kind of change Mr. Obama’s admirers thought they were getting. 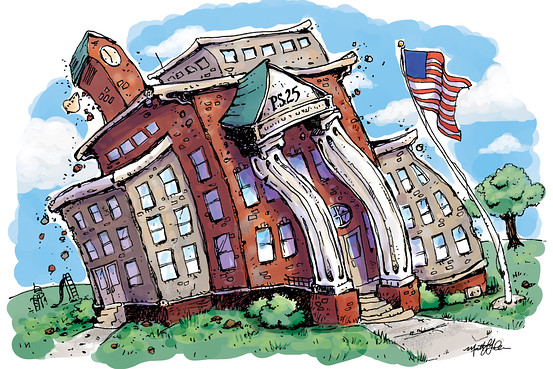 To explain Mr. Obey’s teacher bailout, it is necessary to descend into the lower depths of cynicism. Put it this way: Race to the Top doesn’t make campaign contributions.

According to tabulations by the Center for Responsive Politics, from 1989 to 2010 the two big teachers unions made some $58 million in campaign contributions. The National Education Association gave 92% of theirs to Democrats, and for the American Federation of Teachers it was 98%.

From the wages sent to the teachers by the House Appropriations Committee, the two unions will take a cut to pay for their political operations. Mr. Obey isn’t appropriating this money out of love for teachers. It’s primarily for his party colleagues, to help party professionals survive the 10% unemployment rate.

If this sump pump wasn’t running from the paychecks of unionized teachers to Democratic campaign coffers, it is at least arguable that appropriations for reforms aimed at children in failed inner-city schools would have a fighting chance.

But this is only a piece of it. The financial meltdown of so many states and cities is forcing American liberalism to come to grips with a tough truth: The demands of public-sector unions and the legal obligations to pay their pensions are collapsing the ability to perform what’s left of the traditional liberal agenda.

Nowhere is this more evident than in California.

“San Francisco is the most progressive, pro-union, you know, lefty, and I’m probably the poster boy for that in many ways. But the reality is, if we don’t do something, all of the important programs, not only public defense but we’re talking about children’s programs, after-school programs, education, senior programs, everything that we care about as progressives is going to be lost because it’s being sucked up by the cost of pensions.”

Last month, David Crane, a Democratic adviser to Mr. Schwarzenegger, testified before the California Assembly’s Committee on Public Employees, Retirement and Social Security (which sounds as if it dates to the French Revolution): “Those who should be most concerned about pension costs are families and businesses concerned about California’s colleges and universities, recipients of the state’s health and human services, users of state parks, citizens interested in environmental protection.”

California probably gave David Obey the idea for his funding feint. Mr. Crane says California this year shifted $5.5 billion out of budgets for the state’s public universities, transit, parks and such to pay for obligated pensions and health care.

Nor is this tension merely the result of recession. In a more systematic, 2008 study of spending in Massachusetts for the Institute for a New Commonwealth, Cameron Huff notes that from 1986 to 2006, spending on social services and public safety (the collectively bargained functions) rose more than 130%. Spending on the environment, higher education and housing all fell.

This downward spiral won’t stop when the economy returns. The unions will get theirs; the vulnerable categories will get the shaft. For this to change, the modern Democratic Party would have to change. It’s got to decide if it wants to do more for real people and less for gerrymandered politicians and union protectorates. Lifetime pol Joe Biden says the stimulus “is working.” It is, for the boys in the clubhouse. Honest liberals and progressives distraught over the harsh math of 2010 have more in common with the tea partiers than they imagine.